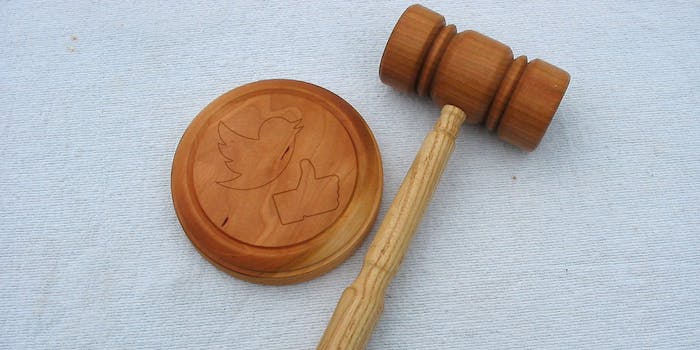 The issue of whether or not threatening language posted on social media should be protected under the First Amendment is being deliberated by the U.S. Supreme Court after a man was sentenced to nearly four years in prison.

A jury convicted Anthony Elonis of Bethlehem, Pa., after he posted a violent rap lyric on Facebook directed at his wife. She later testified that the words left her in fear for life. Elonis’s attorneys contend that no actual threat of violence was meant by their client, saying he drew inspiration from the rapper Eminem, who frequently fantasizes about murdering his ex-wife in his lyrics.

“There’s one way to love you but a thousand ways to kill you,” the offending post by Elonis read. “I’m not going to rest until your body is a mess, soaked in blood and dying from all the little cuts.”

After two lower courts upheld the conviction, the Supreme Court justices are being asked to decided whether the Facebook posts violate a federal law that makes it a crime to threaten another person. Various victim support groups have asked the court to address what they described as an epidemic of online abuse. The Justice Department has argued that, regardless of the authors intentions, such posts can inflict real fear in the minds of those targeted.

After posting the violent lyrics, Elonis was visited at home by an FBI agent. He later wrote: “Little agent lady stood so close, took all the strength I had not to turn the bitch ghost. Pull my knife, flick my wrist and slit her throat.”

“Did you know that it’s illegal for me to say I want to kill my wife,” Elonis said in another Facebook post, mocking a protective order obtained by his wife. “It’s illegal. It’s indirect criminal contempt. It’s one of the only sentences that I’m not allowed to say.”

In a related case, an 18-year-old named Justin Carter was taken into custody last year for making “terroristic threats” on Facebook when he posted about shooting at a school. The comment was made in what many recognize as obvious sarcastic response after a fellow gamer accused Carter of being dangerous or crazy. “I’m fucked in the head alright, I think I’ma SHOOT UP A KINDERGARTEN,” he wrote.

The comment came only months after the deadly shooting at Sandy Hook Elementary. A woman in Canada contacted police in Texas after viewing Carter’s post and he was quickly arrested. While jailed on a $500,000 bond, he was reportedly assaulted and had to be moved into solitary confinement for his own safety. An anonymous donor later posted his bail. He is currently awaiting trial and faces up to eight years in prison for the Facebook comment.

Photo via KeithBurtis/Flickr (CC BY 2.0) | Remix by Jason Reed