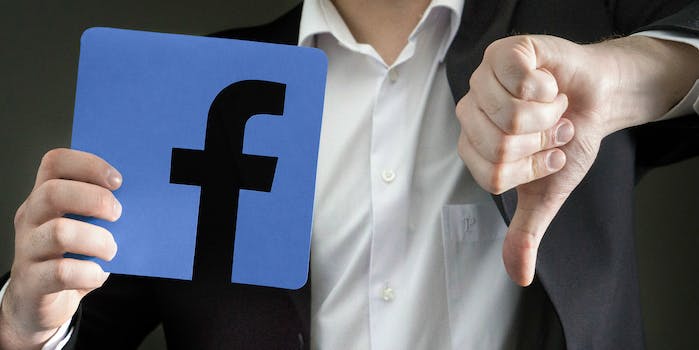 Facebook is down, and the internet has no idea what to do next

The site has been down for hours.

A Facebook outage appears to be affecting a huge number of users with more than 12,000 reports posted to the website status service Down Detector.

“Earlier today, a networking issue caused some people to have trouble accessing Facebook services. We quickly investigated and started restoring access within about an hour, and we have nearly fixed the issue for everyone. We’re sorry for the inconvenience,” a Facebook spokesperson told the Daily Dot.

Reports started coming in early Wednesday morning and peaked at around 11:00am ET. Down Detector’s map shows the outage hitting North America and Europe the hardest with a significant number of users in Japan, South America, and Southeast Asia also having problems.

A few of my colleagues at the Daily Dot are experiencing several different issues with both personal account pages and Facebook’s Business Manager service. There are also reported issues for Facebook-owned Instagram, though they don’t appear to be as widespread. Oddly, Facebook’s status page says its platform is “healthy.”

People are struggling to cope, turning to the only place to find solace: Twitter jokes.

Great, now how am I supposed to respond to angry comments and trolls on my company's FB ads? #facebookdown pic.twitter.com/JNQsflKOz7

Log: Hour 3. Supplies are dwindling. Morale is low. People running around streets asking strangers to like their pictures.#facebookdown

Other services are joking about going back to defeated rival MySpace.

#FacebookDown has left us no choice. We're back on MySpace, baby! https://t.co/i0v8w4AOIQ pic.twitter.com/q3aNP2ggMb