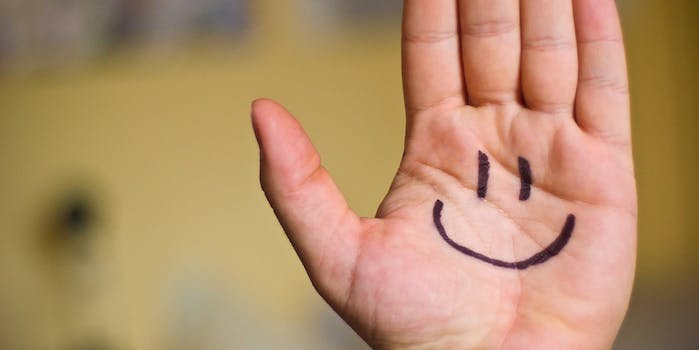 Find out how happy you and your Facebook friends are

An app for Facebook measures how happy you and your friends appear.

Scrolling through a Facebook feed, it can seem like a digital repository for success stories: Engagement rings on manicured hands, professional baby photos, and carefully arranged shots of new condos fill many a News Feed. Status updates punctuated generously with exclamation marks about promotions, vacations, and various celebrations are common. Everyone wants to put their glossiest self on display on social media, the self that knows how to weave a Pinterest-friendly fishtail braid, who makes homemade organic marmalade. The self who definitely never ordered pizza two nights in a row or uses sweatpants as a napkin.

Of course, some people are less interested in using Facebook as a way to digitally curate a greatest-hits version of their lives. Users will also log on to vent, rant, and get into interminable political fights with acquaintances. Instead of treating Facebook like a resume, they treat it like an emotional dumping ground.

The app decides upon your 25 “Top Friends” by looking at who you interact with and have mutual friends with on Facebook. Then it looks through the accessible postings from those friends, scanning for words that denote positivity and negativity.

My top friends are largely an upbeat lot, and I fall somewhere in between. My cheerful, Canadian hippie snowboarder friend, one of the most exuberant people I’ve met in real life, clocked a 90 percent positivity rate. My sister, mother, and uncle were all among the happiest of my Facebook buds as well. I came in with a 73 percent score for happiness. The app doesn’t show how you stack up against strangers, so I don’t know whether that’s below or above average.

Of course, the app isn’t necessarily accurate. It doesn’t factor in how frequently you ‘like’ a post, and there’s no way to detect sarcasm.