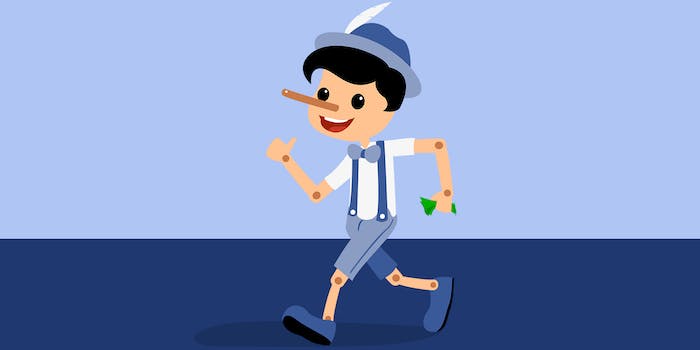 Campaign ads have always lied—so why are we freaking out about Facebook?

It helps to have some perspective.

Last week, Mark Zuckerberg, founder and CEO of Facebook, made another appearance before the House Oversight Committee to face questions about the practices of his social media company.  His responses to one particular line of questioning raised alarms: Facebook’s recent announcement to exempt political ads paid for by politicians from its fact-checking policy.

Though Americans rightly fear the consequences of the unchecked spread of campaign lies under the imprimatur of the candidates themselves, Facebook’s decision doesn’t set a new standard. The core problem is obvious and old as democracy itself: Politicians lie.

And right now, broadcasters are essentially obligated to run those lies. It’s a messy business, sure, but America has survived.

In that light, Facebook’s decision itself isn’t all that controversial. The context, though, complicates things. Social media presents unique challenges to the tools voters and fact-checkers have developed over the years to sniff out and thwart campaign disinformation.

Rather than adjusting to that reality, however, Facebook’s leaders seem intent on convincing us they’re somehow helplessly bound by rules they set for themselves.

Facebook’s position on political ads isn’t absolute. When Rep. Alexandria Ocasio-Cortez (D-N.Y.) pressed Zuckerberg, he said his company would pull false campaign ads if they were socially disruptive—such as claims that might incite violence or disrupt democratic processes—which Facebook already polices in any context.

(Facebook requires all commercial ads to be reviewed for accuracy, and outsources the job to third-party fact-checkers.)

Ocasio-Cortez wasn’t having it, and public condemnation was swift and sharp. Criticism even came from within the company itself. More than 250 Facebook employees (less than 1% of the total payroll) rebuked the company in an internal letter addressed to Facebook executives obtained by the New York Times.

“Free speech and paid speech are not the same thing,” they wrote. “Our current policies on fact checking people in political office, or those running for office, are a threat to what FB stands for.”

The criticism has merit, but it can be misplaced. Democracy made it this far. Is Facebook that much different?

“I think lying is bad,” Zuckerberg told Ocasio-Cortez. “And I think if you were to run an ad that had a lie, that would be bad.” But when the question shifts from morality to action, Facebook believes a laissez-faire approach is best: Trust the public to suss out the truth.

This isn’t simply about free speech. Government regulations governing “truth in advertising,” for instance, restrict companies from running false and misleading ads about their products or competitors, though people often test the fences.

Take Miss Cleo, the self-anointed telephone psychic from the 1990s who drew the wrath of the Federal Trade Commission for advertising “free” readings that were far from it. Or the successful lawsuit against R.J. Reynolds, the tobacco company that claimed its Joe Camel ads didn’t target children. These regulations, however, don’t apply to political candidates.

Courts have made a carve-out in the First Amendment for “political speech.” The underlying principle seems virtuous: Voters are charged with a sacred responsibility, and they have a right to all the information they can get, free from censorship. That sounds a lot like Facebook’s argument: “In a democracy, people should decide what is credible, not tech companies,” Zuckerberg has said.

We might shriek with disbelief when faced with the time-honored American tradition of politicians exploiting this noble loophole. In one of the most extreme cases, the Federal Communications Commission stepped in to protect J.B. Stoner, who ran for U.S. Senate in Georgia in 1972 under the National States Rights Party. The NAACP objected to a paid ad from the self-proclaimed “white racist,” which said the “main reason why n*****s want integration is because n*****s want our white women.”

Examples of false ads abound. Even Barack Obama ran them. And the falsehoods that Russian operatives peddled in the 2016 campaign, exploiting social media, are fresh in the minds of most voters. We all know the problem, but we don’t seem to trust anyone to respond properly.

Individual states have at times tried implementing their own laws, but they’ve proved frustratingly difficult to enforce.

In 1984, Washington state passed a law prohibiting politicians from running false ads, but years later the state’s Supreme Court threw it out on constitutional grounds. A dissenting justice said it was “the first court in the history of the Republic to declare First Amendment protection for calculated lies.”

There are also fairness concerns because in many cases it’s tough to prove a claim is false, and tougher still to prove intent. In the end, anything short of outright defamation—which itself is notoriously difficult for politicians to prove, though this week a suit was filed in Kansas—passes the test.

It’s important to point out these laws only apply to paid ads from politicians run on broadcast networks. Cable networks can reject any ad, and broadcasters can reject political ads from outside groups for any reason. Broadcasters can also refuse to run ads from all candidates running for a specific office, but they can’t run ads from one candidate while withholding ads from an opponent, save for concerns about obscenity (J.B. Stoner’s 1972 ad, for instance, wouldn’t air today) or technical requirements (ad length, sound quality, etc).

We haven’t taken all this lying down. Congress and Robert Mueller’s investigation into Russian interference went a long way toward forcing Facebook and Twitter to cop to their accountability. And the racist “Willie Horton” ad that allies of the George H.W. Bush campaign ran against Democratic opponent Michael Dukakis in 1988 invoked a level of outrage that still reverberates in our collective unconscious. Likewise for the 2004 “swift-boat” attack ads that challenged John Kerry’s military record and integrity.

Both ads were misleading, but even though they were sponsored by outside groups and not the politicians themselves, neither got pulled. They also seem to have been effective: In both cases, the targeted candidates lost.

Somehow, though, voters soldiered on, accepting the casualties without recalling their constitutionality. (The FEC eventually fined the Swift Boat Veterans for Truth 527 group for operating illegally.)

Like it or not, that’s what the constitution has to say on the matter. When we rage against Facebook, then, we have to grapple with our own experience: our susceptibility to lies as well as the tools we’ve developed to deal with them. But this raises new questions.

In Zuckerberg’s hearing, the CEO was careful not to cite any of the above constitutional arguments, and instead framed the policy as Facebook’s call, and Facebook’s alone.

This might be because the above regulations apply to broadcasters, and Facebook claims it’s a technology company, not a media company.

The distinction is make-or-break for Facebook. Under the Communications Decency Act, technology platforms enjoy immunities unavailable to media companies when it comes to issues such as hate speech, libel, and even false advertising. Though Facebook does employ a third-party fact-checking apparatus for ads, its community of more than one billion users is far too large and active to police, and has been for years. As long as we treat Facebook as a tech company—even though almost half of Americans cite it as a news source—they, like politicians, operate largely beyond the reach of legal remedy.

We’re in a new era and have been for some time. We know that social media companies don’t behave like broadcasters, or like any traditional media companies. We also know that those fundamental differences apply as much to their advertising platforms as anything else.

Facebook ads are much cheaper buys than TV, and generally, require less overhead and time to produce and roll out.

As a result, we see a greater variety and volume of political advertising that, thanks to the nature of social media sharing, travels just as far, if not farther, than TV or radio. (For example, more than 160 million Americans use Facebook every day; the most-watched television broadcast in history, Super Bowl XLIX, only caught the eyes of 114 million.) Also consider the asymmetry: Russian operatives took out 3,000 Facebook ads in 2016, but they reached 10 million people.

Although in the past we’ve at least been able to live with political lies—if not snuff them out immediately—technology has challenged that basic competency. We’re no longer talking about a handful of mass media ad buys, but thousands of individual, tailored messages pushed out at light-speed by campaigns with budgets running in the hundreds of millions, even billions, of dollars. The volume, variety, and velocity doom any fact-checking effort.

But we’ve always relied on the truth to come out one way or another. Fact-checkers in the news media and on independent sites have so far done a great service. Indeed, the notoriety of the worst ads often overtakes their message, and a candidate’s duplicity becomes the story.

But how many fact-checkers would Facebook require? Ads could target audiences so tiny that they might be walled off from outside scrutiny entirely. Messages could be slightly tweaked, facts smeared, and the targets would be entirely unaware. You might argue that historically Americans have been fairly capable of processing lies—or at least reconciling ourselves to them — but what if the only people aware of the lies are the people least inclined to question them?

It’s an old concern, thrust into a brave new future.

Roger Sollenberger is a journalist living in Austin, Texas, with his dogs, who are fat, and his wife, who is quite lovely.