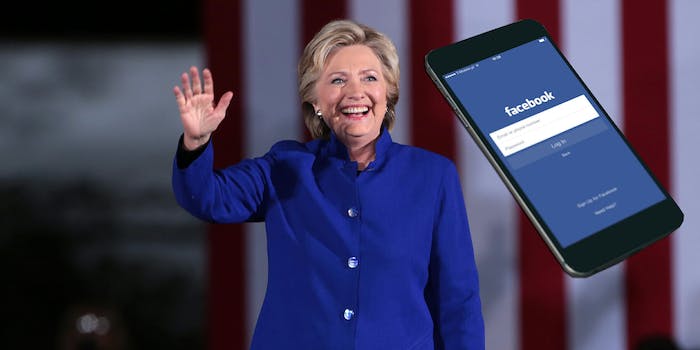 Right-wing media outlets and supporters of President Donald Trump are claiming a series of emails released by Wikileaks founder Julian Assange between members of Hillary Clinton’s campaign and Facebook officials prove that the social media giant was pushing for her to win the 2016 election.

On Thursday night, Assange tweeted out several highlighted emails between Facebook’s Sheryl Sandberg, Mark Zuckerberg, and Clinton officials like John Podesta. The emails are mostly innocuous, yet websites such as Russian-government-funded RT, Breitbart, and True Pundit are claiming they show collusion between the social media giant and Clinton’s 2016 election campaign.

In one email, Podesta wishes Sandberg a happy new year, and later adds, “look forward to working with you to elect the first woman President of the United States.” In another email, Sandberg says she wants Clinton to win “badly.” Zuckerburg wrote to Podesta that he “enjoyed spending time” with him and asks if it would be OK to reach out to him in the future.

Podesta emails reveal that Facebook COO Sheryl Sandberg wanted Hillary Clinton to win "badly", provided research to her in March 2015 and met privately with her on multiple occasions. https://t.co/SxNQ4etdPD pic.twitter.com/dqyRG2zuln

Sandberg was a Clinton supporter and endorsed her during the election. It’s not entirely shocking that she would express her desire for Clinton to win the presidency in an email to Podesta.

While right-wing outlets and web communities seem to think these emails show a conspiracy between Facebook and Clinton’s campaign, recent reports actually show that Facebook was used as part of the widespread effort by Russian agents to influence the 2016 election in favor of Trump.

If there was some sort of coordinated effort between the tech giant and Clinton’s campaign, it’s unlikely it would have missed $100,000 worth of ads being sold to a Russian “troll farm” and the 470 inauthentic accounts it believes were likely “operated out of Russia.” Not to mention Russian agents posing as a well-known Muslim American group on a Facebook page spreading memes and misinformation during the election.

People on Twitter were quick to point out their feelings about Assange’s out-of-nowhere email drop.

Good lord, imbecile. She was a major Hillary supporter/endorser. Of course she wanted her to win. Great work busting this one open. https://t.co/Q7FkX4W7oE

Well Duh. She was a major supporter. Not very bright are you?