Under the hood at Facebook, something isn’t running quite right. In a number of separate incidents identified by the Daily Dot, Facebook appears to be aggressively censoring and temporarily banning accounts for a variety of seemingly bogus infractions.

With LGBT and Native American Facebook users still seeing their accounts suspended over the company’s poorly re-conceived “real names” policy, a new crop of users have been affected by a flawed system of automated censorship. 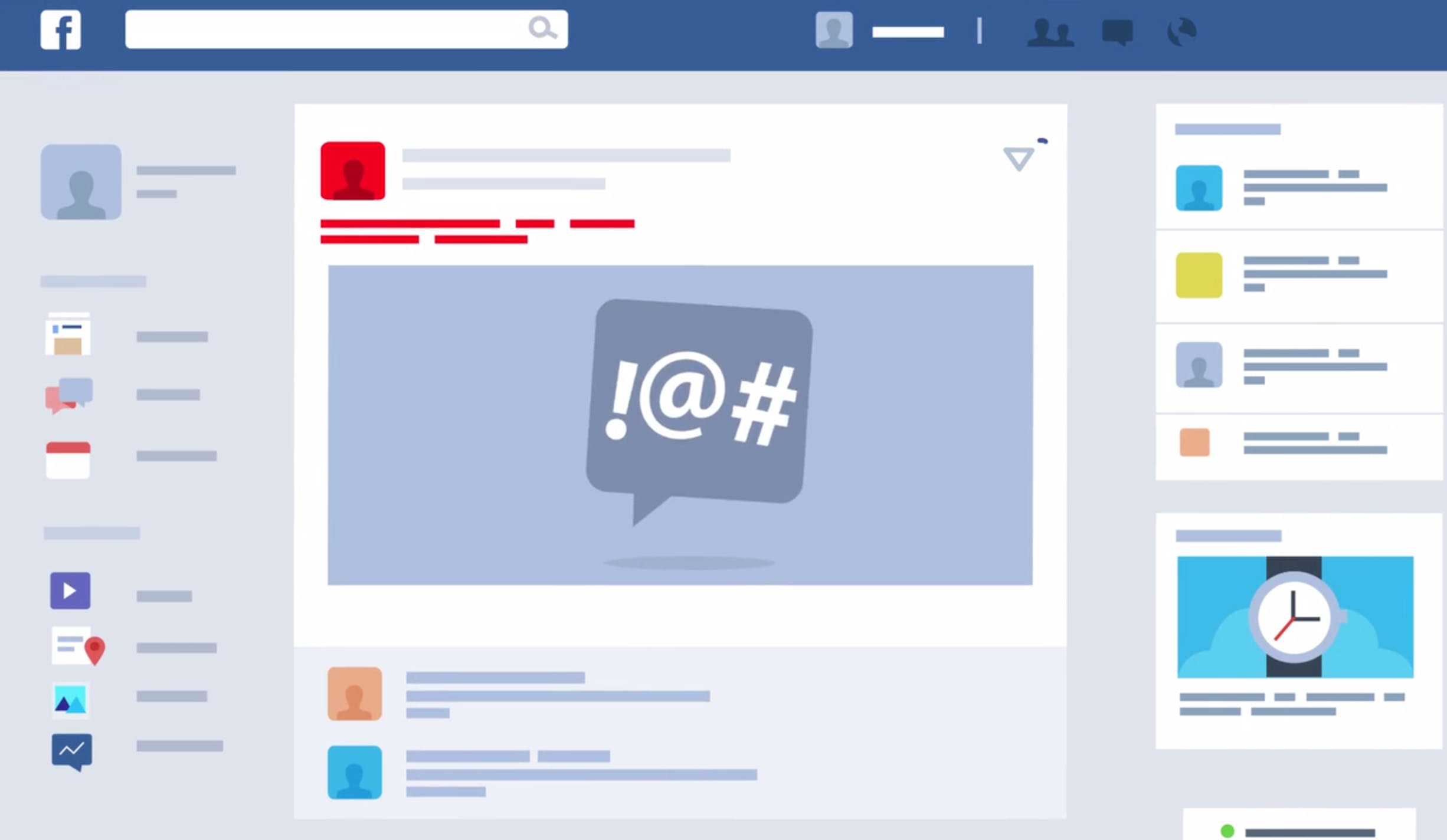 In mid-March, Facebook updated its community standards, which detail what sort of material is objectionable on its platform. Based on the timing, the uptick in flagged Facebook content could be a direct result of the new guidelines, which provide “more guidance on policies related to self-injury, dangerous organizations, bullying and harassment, criminal activity, sexual violence and exploitation, nudity, hate speech, and violence and graphic content.”

In one instance, a Facebook user who manages the social media presence of a major zoo was locked out of both his personal and business account when an image shared in a private message triggered a pop-up message flagging it (incorrectly) for “promoting sexual content.” The account lock began instantaneously on Monday, March 16 and didn’t lift until 72 hours later.

“The picture was totally appropriate and of an impoverished child drinking milk from a cow,” the user explained to the Daily Dot. “I [couldn’t] post, like, or comment anywhere, and my appeals have gone unanswered. The lock was on my entire account, which I use to post to [my] business account.”

The user submitted three appeals but received no response over the course of the 72-hour suspension.

“I’m an account manager for a business so I had to make my wife an admin and log in under her [account] just to do my job. I could be OK with the software establishing the auto lock for safety, but to let it go unanswered for three days is totally unacceptable.”

Facebook also removed links to at least one story about the #freethenipple movement. Apparently breastfeeding is a hot button issue for Facebook’s army of policy enforcers.

FACEBOOK NO. You're blocking a link to an article about Free the Nipple? #thatsironic pic.twitter.com/kbbIoX37iH

Based on a handful of reports, there indeed seems to be an uptick in flagged content prompting consequences on the social network. In mid-March, reports began emerging that some Facebook posts were vanishing with no explanation. In a few examples brought to the attention of the Daily Dot, censored posts have been accompanied by the same 72-hour account freeze. 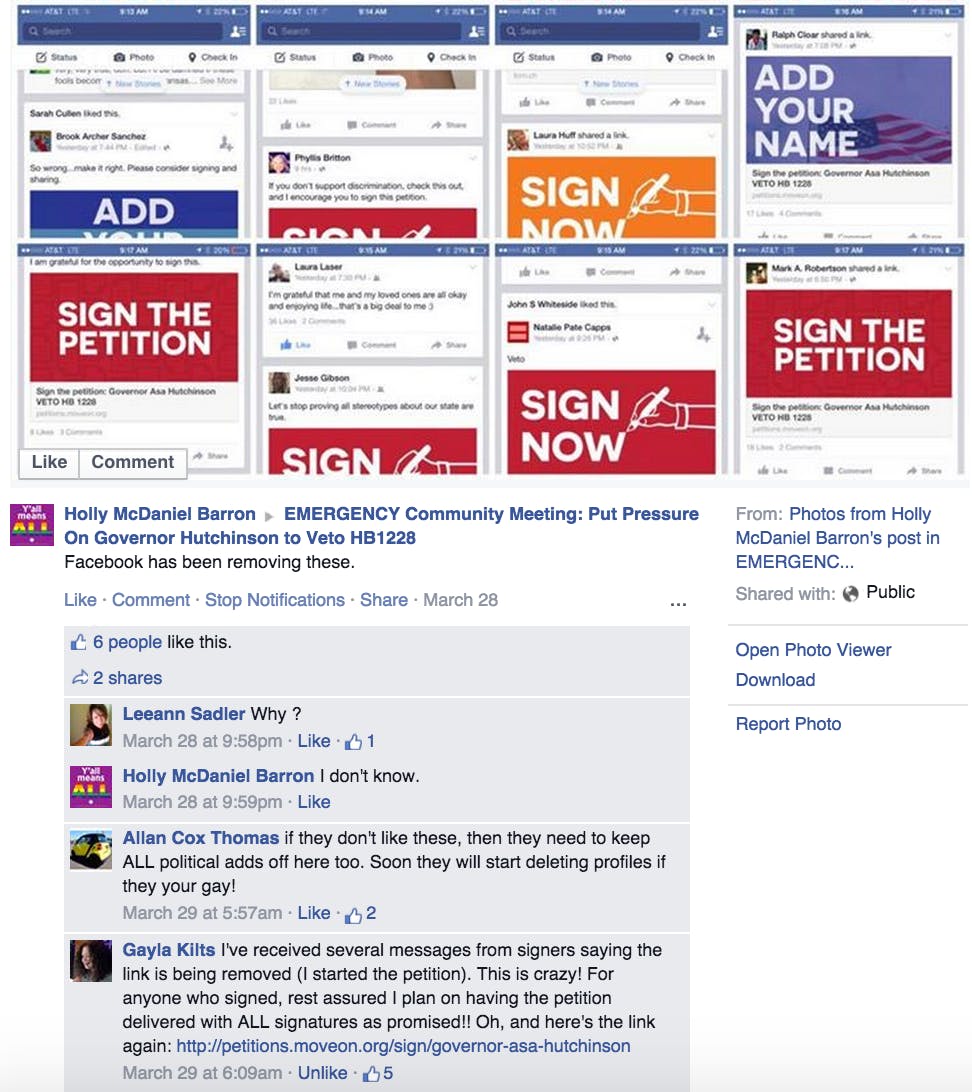 One particular incident revolves around a Moveon.org petition calling for Arkansas Governor Asa Hutchinson to veto HB1228, a political measure that follows the lead of recent controversial legislation in Indiana.

Gayla Kilts, a research scientist who organized the petition through Moveon.org, first noticed something strange happening to posts promoting the petition on March 30, two days after they were created. 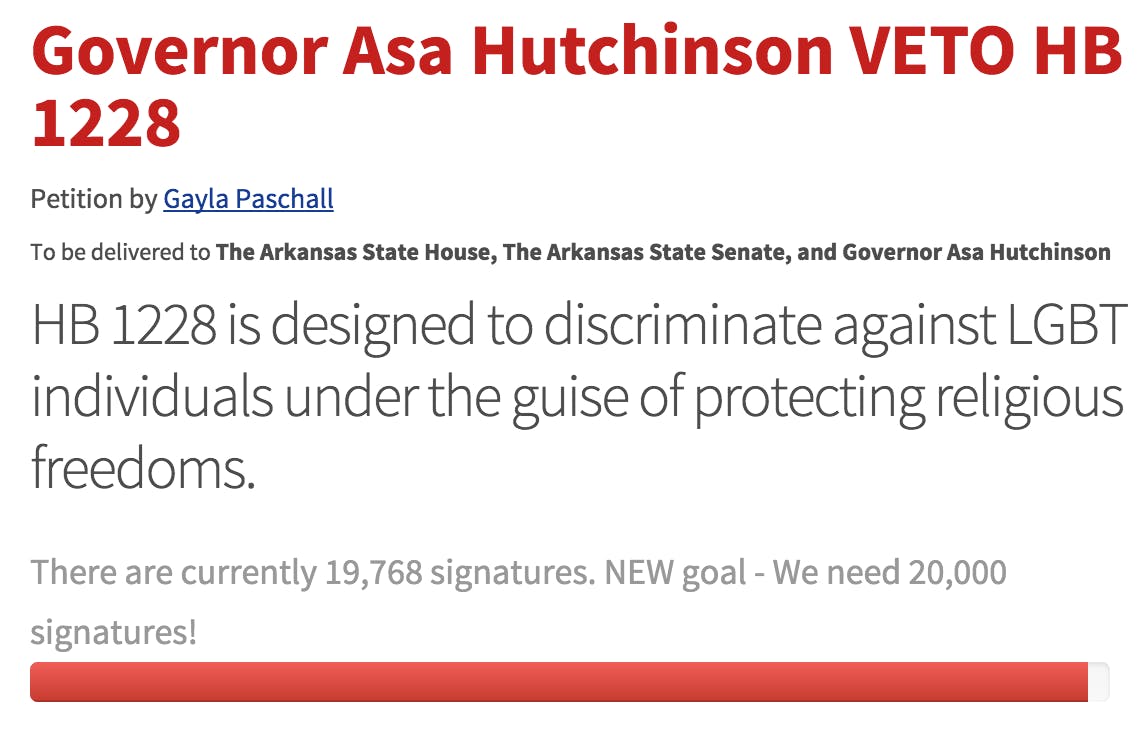 “All was fine until Sunday morning, when I awoke to find 60-plus emails from people who had signed saying they were unable to share the petition on Facebook, and that all the links to the petition had been removed from Facebook.

“All the petition posts and links on my personal page were gone, as were all those I posted on other Facebook pages.”

According to Kilts, the posts were systematically removed on Saturday night. The posts didn’t reappear until 11:45pm Sunday night, 15 minutes before the petition was set to close.

Kilts reached out to Facebook and Moveon.org, but received little in the way of explanation. According to a Moveon.org spokesperson, other petitions were also removed, though it remains unclear why the posts reappeared.

It wouldn’t be the first instance of Facebook’s automated reporting tools backfiring. When Facebook came under fire for suspending many members from the drag and LGBT communities for using chosen names late last year, the company admitted that these accounts had actually been flagged, manually, by one person.

Anyone on Facebook can select the arrow in the upper right-hand corner of a post and report it, flagging it as spam. While it might not explain Facebook’s behavior, this is the same mechanism that allowed a single, homophobic Facebook user to report thousands of accounts with “fake” names.

Other Pages are noticing Facebook’s newly aggressive efforts to enforce an inconsistent rule set. A week ago, the social network flagged one story from the Waco Tribune as “inappropriate content,” removing the link.

The Daily Dot has reached out to both Moveon.org and Facebook and will update the story if and when we receive a response.