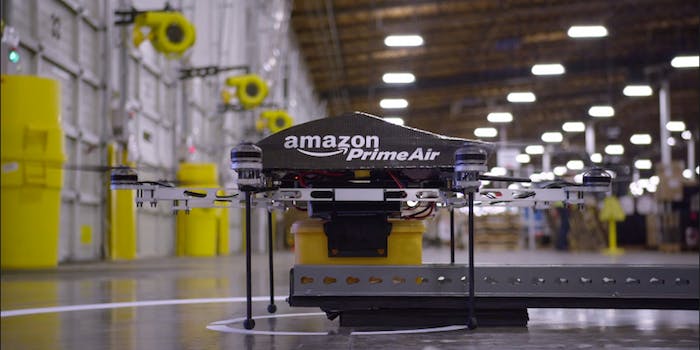 Amazon is still frustrated by the FAA's rules.

We may be slightly closer to a world of package delivery by flying robot thanks to the Federal Aviation Administration’s decision on Wednesday to grant blanket approval to some companies for commercial drone use below 200 feet.

The new rules represent an interim step to help get more drones in the air as the 10 FAA staffers responsible for processing commercial flight requests make slow progress on their giant workload.

The FAA’s temporary policy comes just a week after Amazon got special approval from the independent agency to test its delivery drones. Amazon wants to set up a drone package-delivery program that could get products to customers’ doorsteps in less than 30 minutes. But because of the huge delay involved, Amazon now says that the FAA-approved drone test model is so outdated as to be basically worthless.

[W]hile the FAA was considering our applications for testing, we innovated so rapidly that the [drone] approved last week by the FAA has become obsolete,” Paul Misener, the company’s vice president for global public policy, told a Senate subcommittee on Tuesday.

“We don’t test it anymore,” Misener said of the model that the FAA had approved. “We’ve moved on to more advanced designs that we already are testing abroad.”

The biggest problem, Misener said, is that the FAA requires Amazon and other companies to make sure a drone stays in a pilot’s line of sight at all times. European aviation regulators have eliminated this requirement, and as a result, Misener said, Amazon has made more advancements in testing overseas than in the U.S.

Both new sets of rules—the temporary clearance and the earlier special permission for Amazon—are limited to testing only. Amazon could not establish a commercial program under the FAA’s current requirements.