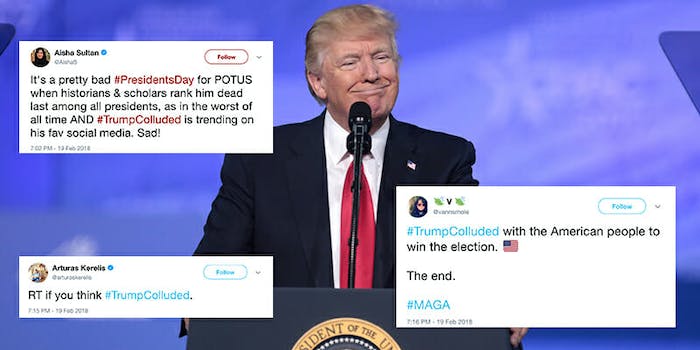 President Donald Trump may not look back fondly on this Presidents Day.

#TrumpColluded climbed to the top of Twitter’s trending topics on Monday, with thousands of users accusing the president of being complicit in Russian meddling during the 2016 presidential election.

By Monday evening, #TrumpColluded had reached the No. 2 trending spot on Twitter, and more than 126,000 tweets had used the hashtag.

Hey @realDonaldTrump! Thought you might like to know that #TrumpColluded is trending. That’s cuz we KNOW you colluded!

So, #TrumpColluded is trending nationwide. Why? Because in 2016, a tainted election in America took place with Russia’s influence consisting of cyber attacks, propaganda/disinformation campaigns, money laundering tactics and connections with trump world. We know it. He does too.

Are we even surprised anymore that we have a Kremlin mobbed up Agent squatting in the WH..#TrumpColluded

Trump has called Russia’s meddling “a hoax” and “fake news.” But a recent indictment by Special Counsel Robert Mueller details Russian actors’ efforts to “sow discord” and advocate for Trump via social media ahead of the election. Following the indictment, Trump claimed he only denied possible collusion between Russia and the Trump campaign.

#TrumpColluded went viral just hours after reports that a panel of political experts had ranked Trump as the worst president in U.S. history. Many people celebrated the virality of the hashtag itself.

It's a pretty bad #PresidentsDay for POTUS when historians & scholars rank him dead last among all presidents, as in the worst of all time AND #TrumpColluded is trending on his fav social media. Sad!

I ♥️ that on Presidents Day #TrumpColluded is trending

Conservative Twitter users also used the hashtag to defend Trump and the legitimacy of the election.

Sorry assholes, just because you are pushing the hashtag #TrumpColluded , doesn’t make it true.

Desperately shouting #TrumpColluded will not make it so. Wake up or get woken up.