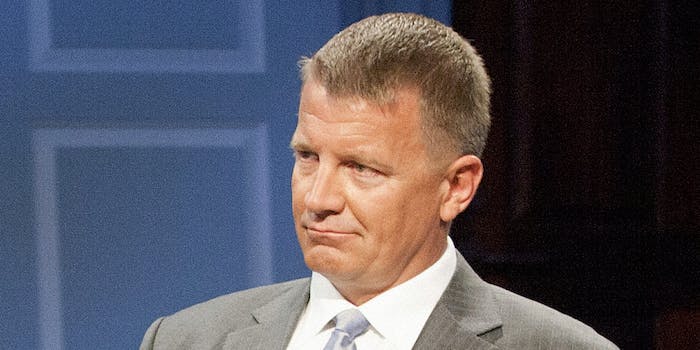 There are a few important points Prince left out of his pitch.

The New York Times Opinion page is facing heated criticism this morning for publishing an op-ed from former Blackwater founder Erik Prince in which he lobbies for the use of paid contractors to complete the American mission in Afghanistan.

While the ethics of using outside contractors in conflicts is an unsettled debate, most people would agree that Prince should not be leading that discussion. In Iraq, contractors for Prince’s Blackwater were accused of committing numerous atrocities and violating rules of engagement—most infamously in the Nissour Square massacre where 17 Iraqis were killed and 14 injured. Earlier this month, in a report on a federal appeals court ruling on the prison sentences for four men involved in the shooting, the Times described the 2007 slaughter as “a symbol of unchecked, freewheeling American power in Iraq.”

More recently, Prince has been accused of working with the Chinese government to send paramilitary forces across the world and building a secret private air force in violation of international laws. Needless to say, Prince, who now runs an organization known as Frontier Services Group, has a vested interest in military contracting. In fact, the Times reported that Prince—who is related to Education Secretary Betsy DeVos and has also been accused of organizing a back channel conversation between President Donald Trump and Russian operatives in the Sechelleyes—was one of two businessmen recruited by Trump’s top aides to “devise alternatives to the Pentagon’s plan to send thousands of additional troops to Afghanistan.”

Prince essentially laid out his case for the president in a publication he regularly dismisses as “fake news.”

My proposal is for a sustainable footprint of 2,000 American Special Operations and support personnel, as well as a contractor force of less than 6,000 (far less than the 26,000 in country now). This team would provide a support structure for the Afghans, allowing the United States’ conventional forces to return home.

This plan would use former Special Operations veterans as contractors who would live, train and patrol alongside their Afghan counterparts at the lowest company and battalion levels — where it matters most. American veterans, whose extraordinary knowledge and experience could be vital to Afghan success on the ground, would serve as adjuncts to the Afghan Army and would perform in strict conformity with Afghan rules of engagement, eliminating the stigma of a foreign occupying force.

Prince makes no mention of Blackwater’s many failings in Iraq. And his argument, as many were quick to point out, that former American soldiers operating as paid contractors of the American government would somehow “trick” Afghans into thinking they weren’t an American occupying force seems an implausible argument.

Prince concludes his argument with a very inept analogy, comparing getting paid to wage war on behalf of a nation state with safely ferrying cargo to outer space.

Just as no one criticizes Elon Musk because his company SpaceX helps supply American astronauts, no one should criticize a private company — mine or anyone else’s — for helping us end this ugly multigenerational war.

Naturally, Twitter erupted at the Times editorial page for letting Prince lobby for his own business to wage war, showing off the absurdity with numerous incisive analogies.

Peter Thiel: Why Giving Me Your Blood Is The Only Way To Find Peace

Rodrigo Duterte: Murdering And Raping Drug Abusers Is Our Only Way to Salvation. Also They Taste Good.

Joe Arpaio: Why Concentration Camps Are Good For The Economy

People also joked that it was perhaps “sponsored content,” a new revenue stream for the paper.

You can read the whole editorial here.