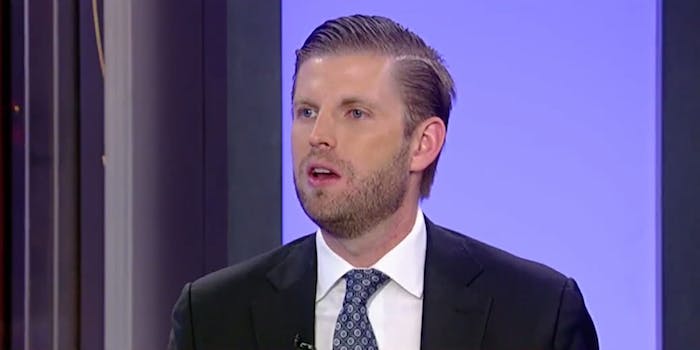 He said Democrats 'will come after everybody relentlessly.'

Eric Trump, President Donald Trump‘s son, has a dire prediction if Democrats take the House of Representatives after the 2018 midterms: they’ll investigate “everybody.”

The president’s son made the claims when speaking on Fox & Friends on Thursday morning. The hosts asked him about whether or not Democrats will begin investigating his father and his family if they are successful in this November’s election.

“You watch the level of harassment—if the House flips, they’ll be investigating you,” Eric Trump told the hosts, gesturing to them with his head. “They’ll investigate everybody. That’s what these people do. They weaponize a legal system. They will come after everybody relentlessly. They’ll know that there’s nothing there. It’s harass. It’s distract. They’ll plant every story.”

The president’s son’s hand-wringing over the 2018 midterms may be well placed.

Real Clear Politics, which collects data from several polls to show an average, shows that Democrats have 7.6 percent lead over Republicans on a generic Congressional vote. Recent polls show that Democrats are leading by as much as 11 points, to as little as one point.

Whether or not Democrats take control of the House after the midterms, its unlikely the hosts of Fox & Friends will be on their investigation radar, as Eric Trump seemed to imply (most likely hyperbolically).