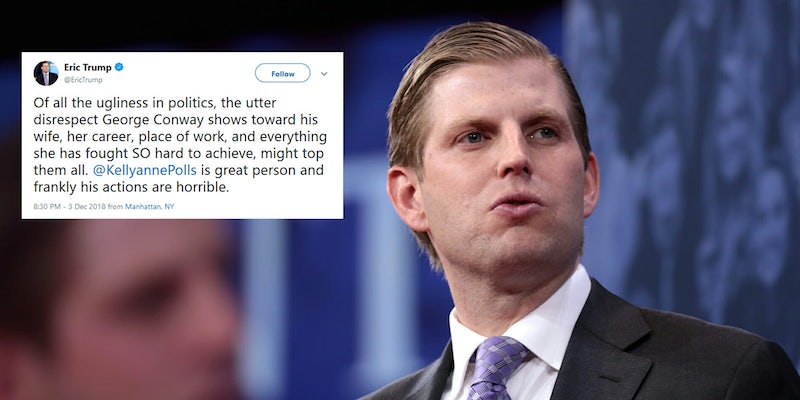 “Of all the ugliness in politics, the utter disrespect George Conway shows toward his wife, her career, place of work, and everything she has fought SO hard to achieve, might top them all,” the president’s son tweeted.

Of all the ugliness in politics, the utter disrespect George Conway shows toward his wife, her career, place of work, and everything she has fought SO hard to achieve, might top them all. @KellyannePolls is great person and frankly his actions are horrible.

The attack from Eric Trump came just hours after George Conway suggested that the president tampered with a witness (in relation to Special Counsel Robert Mueller‘s investigation) when Trump tweeted praise for Roger Stone, adding that it was “nice to know that some people still have ‘guts.’

In his tweet, Conway was referencing statutes related to witness tampering and obstruction of justice. Given the president’s history, people found Eric Trump’s attacking someone for having ‘disrespect’ for their wife to be a bit much.

I'm pretty sure George Conway didn't have sex with a number of women and then pay to keep them quiet. Wait – that was your daddy. His actions are the actions of a lawyer and a patriot. @KellyannePolls has known him longer than you, and I don't see her divorcing him, so STFU https://t.co/v4UEStEUMB

tfw you come from a proud line of woman respecters https://t.co/XfOwwtqSX0

According to Eric's father in 1994, "putting a wife to work is a very dangerous thing." He realized his mom's "softness disappeared" when he overheard her taking charge. When they'd come home after work and "dinner's not ready, I go through the roof," so.. https://t.co/tyeQrLNAuQ https://t.co/vuGbeXt15b

She also once attempt to go off-the-record to trash her husband in an interview.