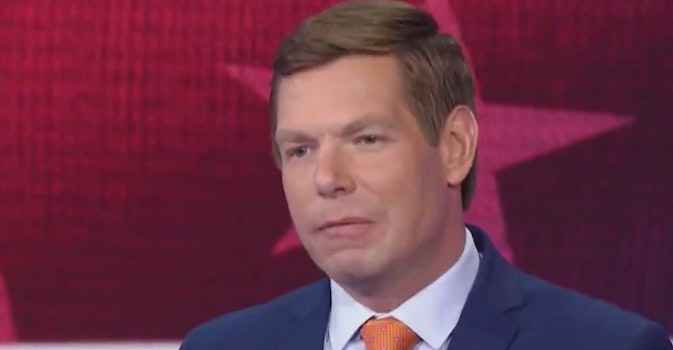 Eric Swalwell burns the hell out of Joe Biden

You can forgive yourself for not knowing who Rep. Eric Swalwell (D-Calif.) is heading into tonight’s Democratic debate. But the California congressman, who is running on a gun control platform, got his name out there immediately by burning the hell out of front-runner Joe Biden.

Swalwell pulled out an old Biden quote from 31 years ago, when the former vice president, then running for president in 1988, said it was time to pass the torch to a younger generation.

Swalwell told Biden, who is 76, that he was right, it’s time to pass the torch.

"I was 6 years old when a presidential candidate … said it’s time to pass the torch to a new generation of Americans. That candidate was Biden."

Swalwell quotes Biden from decades ago saying it's time to "pass the torch" to the next generation of leadership. Biden said he is still holding the torch but didn't provide a response for how he is still a leader for young generational change.

Eric Swalwell: Joe Biden was Right when he said we needed to pass the torch to a new generation of Americans… 32 years ago

Eric Swalwell comes out swinging HARD… “Pass the torch,” he repeats, invoking the words of Joe Biden from his 1988 campaign, when Swalwell says he was 6 years old. #DemDebate2

That Biden line was fuegoooooooo

biden: PRY THE TORCH FROM THE STATUE OF ME THAT GUARDS MY GRAVE

Swalwell: "Pass the torch” to a younger generation.
Biden: “I'm still hanging on to that torch.” #DemDebate2 pic.twitter.com/114kr3zxP4

This being 2019, the Swalwell campaign already had a tweet out for his prepared burn.

Pass the torch, @JoeBiden. It's time for a new generation to lead. #DemDebate #Swalwell2020