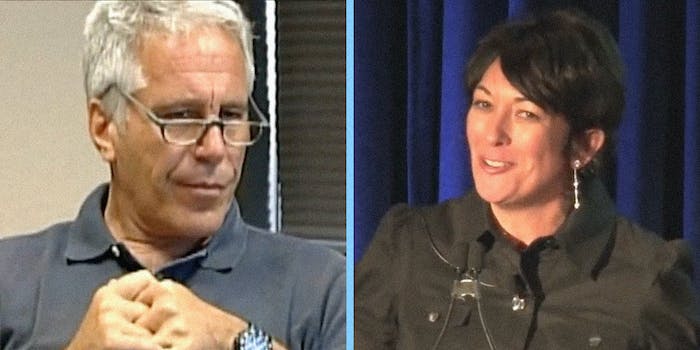 Xeni Jardin sent the tweet that launched a thousand memes.

Jeffrey Epstein’s death did little to quell the conspiracy theories and rumors about the billionaire serial sex offender. In some ways, the conspiracies have ramped up in the nearly two years since he was found dead in his jail cell. Now a tweet calling Epstein gay is raising eyebrows.

Blogger Xeni Jardin, formerly the co-editor of Boing Boing, threw another rumor into the mix on Twitter Friday morning. She claimed Epstein and his alleged co-conspirator Ghislaine Maxwell are gay. Jardin said that sources close to the pair told her this.

As proof, she pointed to their style choices, specifically Epstein’s habit of wearing “monogrammed bathrobes and slippers” around Manhattan, and Maxwell often wearing good dresses “badly,” which she said proves Maxwell’s a lesbian.

Epstein was accused of trafficking dozens of women for sex. In April, the New York Daily News reported that a man sued Epstein’s estate for forcing him into sex, but it is not clear whether the allegation is that he was forced to have sex with Epstein or someone else.

Naturally, people have thoughts about Jardin’s claim that he and Maxwell are gay.

Some decided that she was just joking and that it was a bit.

Others weren’t so sure.

No matter which is true, that it was a joke or not (it seems not, but who knows), the tweet quickly inspired memes.

Hours after the original tweet, Jardin clarified that Epstein was “sexually ‘fluid.'”