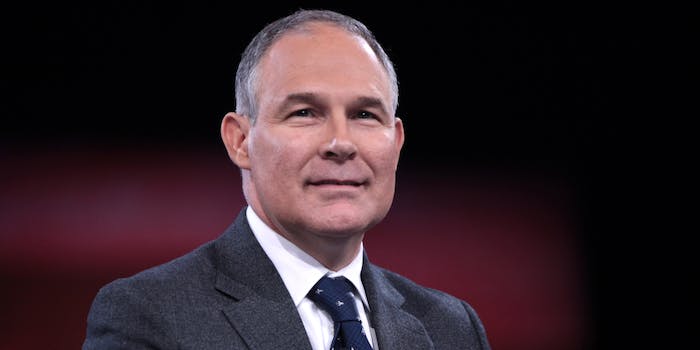 More than 1,900 web pages were either removed or modified.

Environmental Defense Fund (EDF) was investigating the removal and modification of thousands of pages of data that began disappearing soon after President Donald Trump took office. The organization was particularly interested in an apparent purge of the agency’s web page on the Obama-era Clean Power Plan, which detailed the then-administration’s plan to tackle carbon emissions.

“We appreciate your assistance in this time-sensitive manner,” Freire said in an email dated April 28, 2017.

“How close are we to launching this on the website? The Administrator would like it to go up ASAP. He also has several other changes that need to take place,” one reads.

“You can tell him we … are just finishing up,” the response said.

The archiving purge included elimination or modification of scientific fact sheets and publicly available toxicology information on each state and locale across more than 1,900 web pages. Emails also suggest that EPA staff manipulated search engine redirects to divert those looking for the Obama-era plan to Trump’s “energy independence” executive order.

“The disappearance of these key web pages makes it harder for the public to access vital information about climate change and public health, including information about the Clean Power Plan,” said EDF Attorney Ben Levitan in a press release.

“Obscuring information thwarts meaningful public participation in EPA’s work to protect Americans’ health and safety,” Levitan continued. “It reinforces serious concerns that Pruitt has predetermined that he will repeal the Clean Power Plan, and that the current rulemaking process is a sham.”

Days before the internal emails circulated, with a government shutdown looming, the EPA had announced it would suspend technical work on the database, which at the time scared environmentalists and open-data advocates. While the Trump administration publicly insisted that the website would still be available, activists made plans to scrape all the scientific data from the website.

The Washington Post’s database editor Steven Rich announced on Twitter that he had quickly written a script to enable the extraction of the data.

Well, let's get to scraping, my friends. pic.twitter.com/8svzlBYSuZ

UPDATE: Wrote script to pull all facilities, but there's data in each one. Anyone want to focus on how to parse this?https://t.co/6J0SDGzGoo

When asked about the EDF’s discovery on Monday, an EPA spokesperson told ThinkProgress that the information was “still easily accessible.”

“Of course the site will be reflective of the current administration’s priorities,” the agency argued. “With that said, all the content from the previous administration is still easily accessible and publicly available through the banner across the top of our website.”

The EDF still took issue with the non-transparent method of modifying and removing web pages.

“The website purge fits Pruitt’s troubling pattern of ruling EPA under a cloak of secrecy, which is no way to run an agency entrusted with protecting the public health and environment,” the organization said.