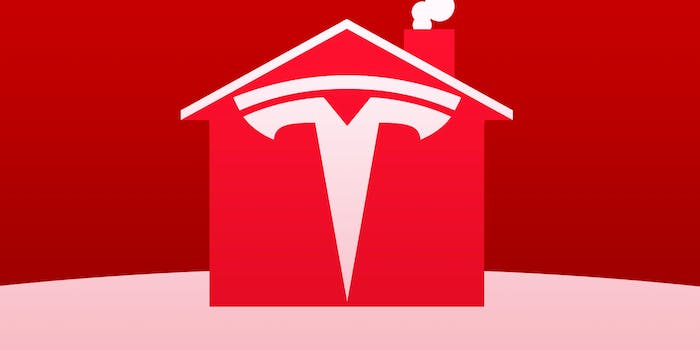 Here’s what we hope Elon Musk will announce next month

It's likely a home battery, but we're dreaming of something bigger.

Tesla CEO Elon Musk teased us on Monday with a tweet about an announcement on April 30: Tesla is launching a new product line, but not a car, in one month.

Major new Tesla product line — not a car — will be unveiled at our Hawthorne Design Studio on Thurs 8pm, April 30

It’s likely the company will be rolling out the start of its home line, a lithium-ion battery that can power an entire home and could deal a major blow to utility companies. Musk said earlier this year that he wanted to provide consumers with rechargeable home batteries and that the technology would be available in just a few short months.

While a home battery is the most logical next step for Tesla, we don’t know for sure what the company will announce. So we’ve put together a wishlist of all the things we hope Tesla is getting ready to share with the world. Maybe one day we can thank Tesla for checking off our entire wishlist.

Last year, Tesla unveiled the D, and Daily Dot staff writer Aaron Sankin hopes that Musk will follow that up by unveiling the C: “An electronic cigarette you can smoke for six months without having to charge.”

If it’s not a home battery, writer Gavia Baker-Whitelaw hopes that it’s a ready-made moon colony. She also suggested a working holodeck, the programmable virtual-reality simulator from Star Trek that lets people enter holographic worlds and interact with virtual people, places, and things.

Continuing the Star Trek trend, deputy morning editor Eric Geller said that the science-fiction franchise’s replicator would be the next best thing to come out of Tesla. Unlike the MakerBot 3D printer of the same name, the Star Trek device can recycle materials to 3D-print literally anything, from food to spare parts.

Thinking a little closer to home, tech writer Myles Tanzer wants Tesla to get all up in his kitchen and release a Musk-approved sous-vide machine. If Tesla is already talking about home batteries, kitchen appliances are the next logical step, right?

Illustrator Jason Reed would like to request a Mr. Fusion, the power source of the DeLorean in the Back to the Future movie franchise. The fusion reactor turned waste into fuel and powered the flying time machine, turning it into a key part of the cult-classic film series. It’s unclear why Tesla hasn’t already made an actual time-traveling DeLorean, but at this point, it’s probably just a matter of time.

As for me, I’m hoping Tesla is announcing an artificial-intelligence-powered spaceship that will be sent on a search for planets to terraform. There’s a better likelihood of SpaceX launching this undertaking—but hey, a girl can dream, right?