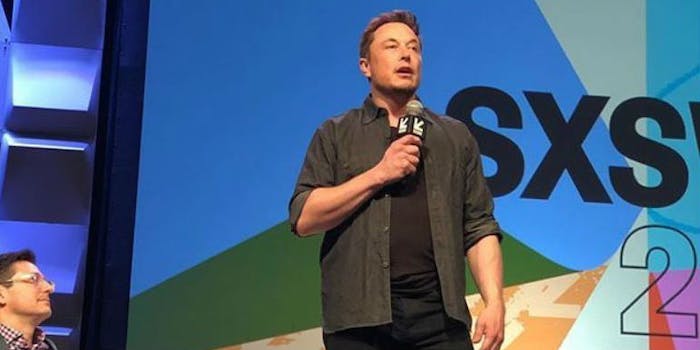 The SpaceX CEO debuted a Jonah Nolan-directed short about Spaceman.

Elon Musk made a surprise appearance at SXSW 2018 on Saturday, joining a panel of actors and directors of the hit HBO show Westworld.

The Tesla and SpaceX CEO hinted at his appearance on Twitter a few days prior, explaining that he’d be at SXSW with Westworld directors Lisa Joy and Jonah Nolan.

Will be at SXSW Sat/Sun with Jonah & Lisa, who created Westworld. Jonah made an incredible short reel of Falcon Heavy & Starman. Releases tmrw aft.

Musk took the stage in the latter half of the session to debut a trailer about SpaceX’s successful Falcon Heavy rocket launch and Starman, the dummy driving his midnight-cherry red Roadster to Mars. Before inviting Musk onstage, Nolan said he wanted to give the audience a positive closing to a discussion about a show that isn’t particularly “optimistic.”

“The only way I know how to share [the Falcon Heavy launch exprience] is a trailer. It’s not for TV or a movie, it’s for the next part of the human story,” Nolan, who directed the film with Joy, said during the panel.

Those in attendance were floored to see the larger-than-life figure in person.

I cannot believe what just happened! Elon Musk just joined the Westworld panel at #sxsw I am 12’ away from a living legend. https://t.co/keGuxPinTq pic.twitter.com/kBDqU66u2V

Literally had tears in my eyes as Elon Musk crashed Westworld talk. Seriously. This was wild #sxsw pic.twitter.com/las8qgOWHF

An emotional Musk gave a few short words of inspiration before running the short trailer.

“There are a lot of negative things in the world. There are a lot of terrible things happening all over the world, all the time. There are lots of problems that need to be solved, that are miserable and get you down,” Musk said. “Life can’t just be about solving one miserable problem after another. That can’t be the only thing. There need to be things that inspire you that make you glad to wake up in the morning and be part of humanity. “

He closed with his outlook on humankind and what the future holds.

“It’s time to go forth, become a star-faring civilization. Be out there among the stars, expand the scope and scale of human consciousness. I find that incredibly exciting. That makes me glad to be alive. I hope you feel the same way.”

We will post the official trailer once it’s released.