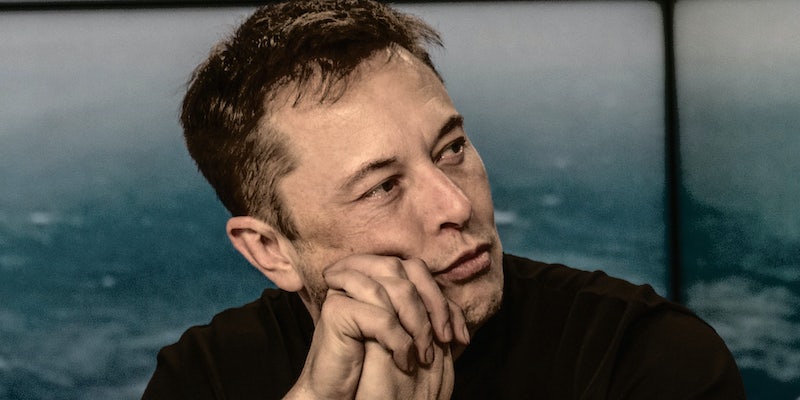 It only happened twice.

Elon Musk shared a meme that included a picture of a Nazi soldier, just hours after falling for a quote from a Nazi pedophile.

Musk has a penchant for sharing memes and diving deep into the bellows of Twitter conversation, to what end, no one knows. But as with most things on the internet, it all eventually goes Nazi.

Last night, Musk said that “Twitter needs to become by far the most accurate source of information about the world.”

While a number of people called Musk out for his sharing of a Paul Pelosi conspiracy in the days after the speaker of the House’s husband was attacked with a hammer, one person instead shared with him a meme.

“To learn who rules over you, simply find out who you are not allowed to criticize,” the meme said, attributing it to Voltaire, adding that Elon does “not want to rule over us, but for us.”

It also included the memetic “Much wow” to the end.

“That is my goal,” Musk replied. But he deleted the tweet after a number of users informed him that he wasn’t quoting a famous French philosopher, but a neo-Nazi pedophile.

Just half a day later, Musk shared a meme about simpler times, when someone’s inbox would only hit with a couple of messages a day.

“How times have changed,” Musk wrote.

To which, Musk was told, that the picture he used, of a soldier with carrier pigeons strapped to his back, was a Nazi soldier.

“The Getty caption for this photo of a Nazi: ‘A German Wehrmacht soldier carries a cage of carrier pigeons used for relaying messages, on the western front during the German invasion of France, known as the Battle of France, in WWII, circa May 1940,'” one user quoted tweeted

Musk concluded a strong half-day online by telling people to vote Republican in the midterms, because he appreciated the checks and balances of divided government. Some might say that’s an explicit Nazi endorsement, given the criticism surrounding Republicans’ ties to far-right movements. But if you take him at his word, he doesn’t support fascism, just accidentally uses its memes.