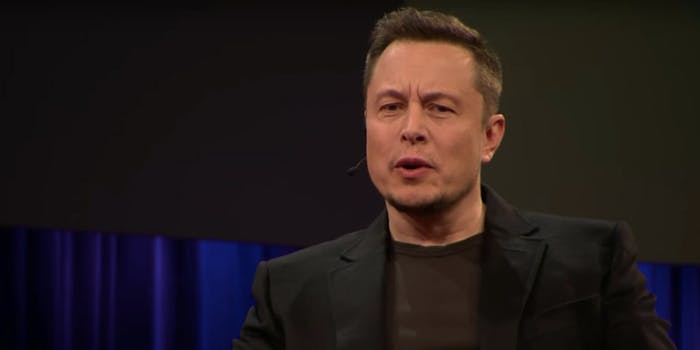 He's getting exactly what he asked for.

Elon Musk is officially getting sued for libel by Vernon Unsworth, the British cave diver who Musk called a “pedophile” and “child rapist” after a cave rescue mission in Thailand, Mashable reports.

The saga between the tech billionaire and the rescuer started in July, when Unsworth criticized Musk’s minisubmarines that were built to save a boys soccer team and coach from flooded caves in Thailand. In an interview with CNN, Unsworth said Musk’s submarines were a “PR stunt” and that there was no way they would actually work.

Cave rescuer on Musk: “It was a PR stunt. It had no chance of working.” pic.twitter.com/uPgRMQLkRx

In response, Musk launched into a raging tirade on Twitter, calling Unsworth a pedophile or “pedo guy,” and dismissed the flooding in Thailand.

“You know what, don’t bother showing the video,” Musk said on July 15 in a now-deleted tweet. “We will make one of the mini-sub/pod going all the way to Cave 5 no problemo. Sorry pedo guy, you really did ask for it.”

The accusations continued in August, when Musk emailed a BuzzFeed reporter to ask why Unsworth hadn’t sued him yet if he wasn’t a pedophile.

“I suggest that you call people you know in Thailand, find out what’s actually going on and stop defending child rapists, you fucking asshole,” Musk said in the email. “He’s an old, single white guy from England who’s been traveling to or living in Thailand for 30 to 40 years, mostly Pattaya Beach, until moving to Chiang Rai for a child bride who was about 12 years old at the time. There’s only one reason people go to Pattaya Beach. It isn’t where you’d go for caves, but it is where you’d go for something else. Chiang Rai is renowned for child sex-trafficking.”

Musk appeared to have no evidence for his claims, which made his reactions even more jarring. In the same email to BuzzFeed, he questioned Unsworth’s diving credentials and asked if he was even involved in the rescue operation or not.

Musk ended the message with this: “As for this alleged threat of a lawsuit, which magically appeared when I raised the issue (nothing was sent or raised beforehand), I fucking hope he sues me.”

But Unsworth’s lawyer, L. Lin Wood, said a letter had already been sent to Musk on Aug. 6 warning him that a civil complaint was coming his way.

@elonmusk should check his mail before tweeting. pic.twitter.com/3c9QWtdp25

The lawsuit was filed on Monday in Los Angeles. Unsworth is requesting up to $75,000 in damages plus a court order to stop Musk from making any more allegations against him.

Some of Musk’s loyal fans were unhappy to hear about the latest development.

Some people were pleased.

What he always wants pic.twitter.com/bm6ndpDYm2

In short, Musk got what he asked for.