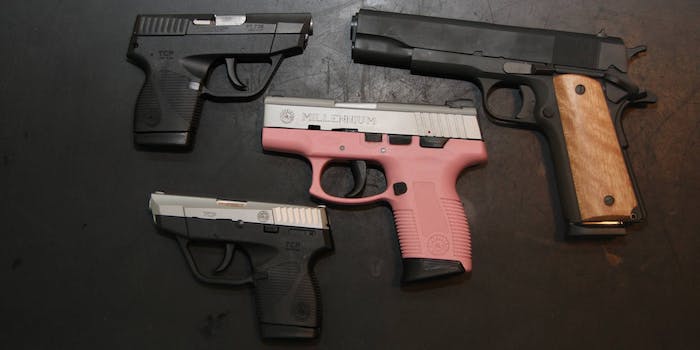 Dozens have already happened in the time the account was started.

A new Twitter bot is bringing data and news articles about the next gun incident straight to your Twitter feed.

While some of that data is already mapped out through a variety of organizations and publications and some places only track mass shootings in the U.S. (commonly measured by incidents in which four or more people are shot), the Twitter bot, @USGunIncidents, expands its reach to tweeting about every gun incident in America.

Elliot Blackburn, a coder based in the U.K., created the bot with an open-sourced code available through GitHub with an MIT license. It picks up news of shootings from sources and reports the number of people killed or injured along with an accompanying news article if available.

“I really want to highlight the issue that these incidents are happening all the time in the US,” Blackburn told the Daily Dot via email. “Twitter does that well. You can scroll through the days’ stream and really see how much this is happening. One incident in even 10 or so tweets is incredibly powerful, but it’s also presented as a normal tweet. The idea that these horrible acts are seeping into the normal routine is truly heart breaking.”

“I’m hoping the bot can build up a vague timeline of gun crime. The fact that it will put them straight to your Twitter feed also creates a heavy impact,” Blackburn adds in a blog post.

I made a twitter bot which reports recent gun violence in America with stats and sources. It's also open source – Check out @USGunIncidents

He challenges people to follow the account to see how long it takes for a gun incident to appear in their Twitter feeds and he emphasizes that “the issue isn’t just the death toll, the injury toll is equally as real and also important even if everyone did walk away with their lives.”

Blackburn launched @USGunIncidents on June 27. In the days since, 43 gun incidents have occurred in the U.S. as of press time, a number that didn’t surprise him. It’s likely that number will grow.

Update 6:59pm CT, July 3: This piece has been updated to include comments from Blackburn.