She lost her case, but became a lightning rod for social change in the process.

Ellen Pao, Reddit’s interim CEO, lost a gender discrimination case against venture capital firm Kleiner Perkins Caufield & Byers last week in a landmark case that shed light on sexism and discrimination in Silicon Valley. Many of Pao’s supporters were shocked that she lost.

In the wake of the jury’s decision late Friday, the hashtag “#ThankYouEllenPao,” began trending, accompanied by tweets thanking Pao for speaking up and sharing her experiences with sexism on a very high-profile scale.

The case resonated with a number of people in Silicon Valley who wanted to share their support in a more tactile way, and a group purchased a full-page advertisement in the Palo Alto Daily Post, a newspaper serving 1,000 locations in Silicon Valley, including a coffee shops and other haunts popular among venture capitalists. 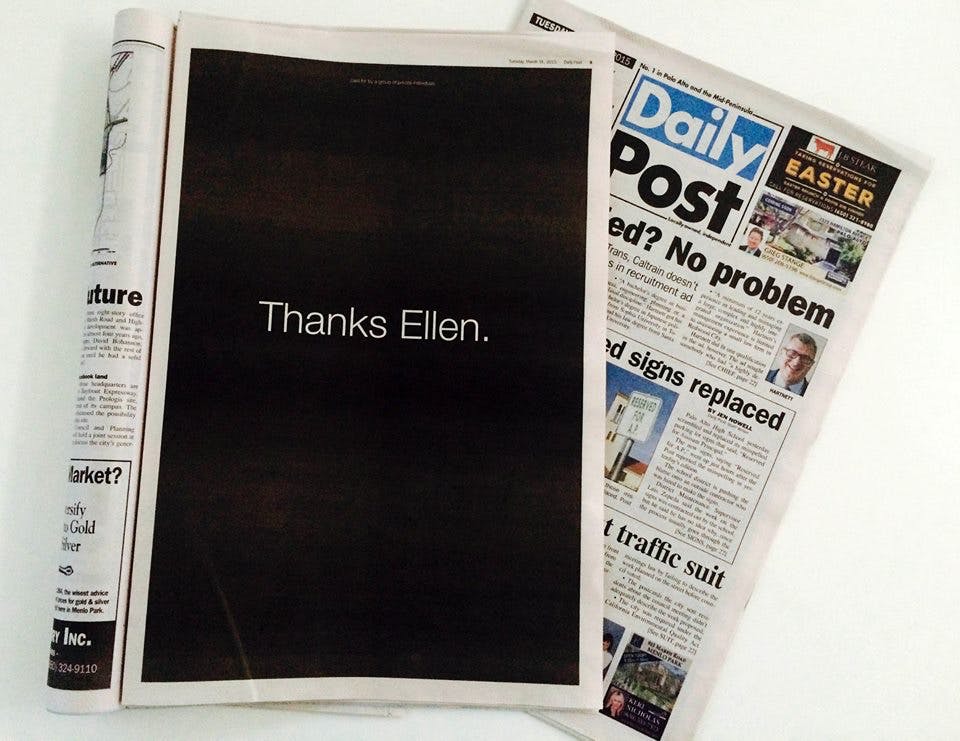 The ad says “Thanks Ellen,” in white lettering on a black background.

“Ellen’s story resonated, it hit a chord with so many women,” Lori Hobson, one of the people behind the simple advertisement, told USA Today. “We wanted to thank her publicly for being brave enough to tell it, and make it so other people might tell their stories.”

According to USA Today, the group collected donations for the advertisement through PayPal, and a graphic designer volunteered to create the ad for free.

The group started a Facebook page to further the campaign, while T-shirts and coffee mugs with the same statement are available for sale.