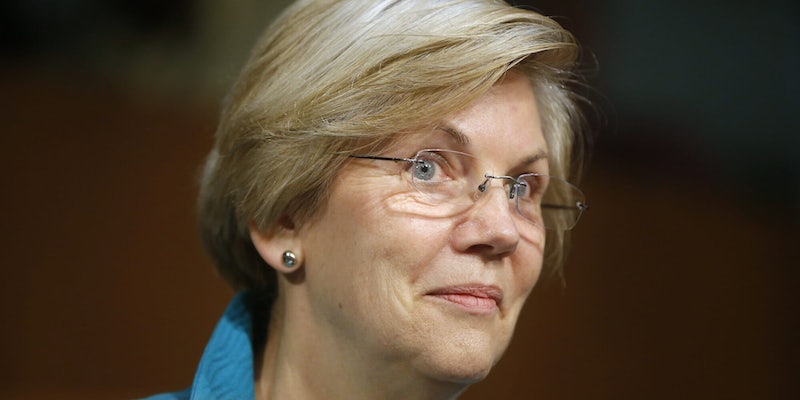 Sen. Elizabeth Warren has a passionate fanbase—and a lot of haters.

With a Democratic electorate hungry to take down Donald Trump, the 2020 Democratic presidential race has already begun in earnest. Sens. Kamala Harris, Kirsten Gillibrand, Cory Booker, Bernie Sanders—even Mark Zuckerberg—have been the subjects of innumerable “will they or won’t they” profiles speculating about which of them will emerge as the next Democratic presidential nominee. One nationally known Democratic figure has been strangely absent from the conversation: Elizabeth Warren.

Though she shares progressive bonafides that make Sen. Bernie Sanders (I-Vt.) appealing, she doesn’t have the same tense relationship with the party establishment. Though she is one of the more left-leaning members of the Democratic Party, she’s also an experienced lawmaker. Her fundraising numbers are excellent despite her solid chances of winning re-election. Amy Walter of the Cook Political Report went as far as to say, “It’s going to be very difficult for a Democrat to win the nomination of his/her party on anything but the Warren platform.”

So, what is holding back the buzz around the Massachusetts senator?

Warren’s explicitly anti-Wall Street stance has made her an early target of conservative donors. A Super PAC called Massachusetts First appeared out of nowhere to launch attacks on Warren earlier this year. Republican billionaire Robert Mercer, well known for his support of Trump and a former stake in Breitbart,  has been identified as a big donor to that effort. Two other existing PACs have also spent money criticizing Warren; it’s virtually certain there are more to come.

Her work with projects like the Consumer Finance Protection Bureau has not endeared her to business interests, and thanks to Citizens United, corporations have a huge influence on electoral politics. Warren’s opposition to big banks and big business has put a target on her back, and current campaign finance laws will allow corporate interests to try to bury her with cash. Her recent book, This Fight is Our Fight, offers critiques of the banks, Walmart, for-profit universities, chambers of commerce, and more. It’s safe to say that all these groups have noticed, and many intend to put their money where Warren’s mouth is in the coming years.

While Warren hasn’t drawn quite the amount of ire that Sanders and Rep. Keith Ellison (D-Minn.) have gotten from establishment forces, she is to the left of most other early 2020 contenders. Earlier this month, she told CNN that the 2016 Democratic primary was “rigged.” The Boston Globe called her “the rightful heir to the Sanders army of support.” With this perception comes criticism from an establishment that is still sore about Sanders’ insurgent campaign. Warren decided not to come down too hard one way or another in 2016, despite her ideological alignment with Sanders. But it looks like she is throwing her lot in with the progressive wing of the party as 2018 and 2020 approach. In fact, she recently appeared in a joint video with Sanders criticizing the Republican tax plan.

Though many Democrats praise Warren, she does have her critics in the party. When asked about Warren’s presidential ambitions by the New Republic, Jim Kessler, of the center-left think tank Third Way, offered former Vice President Joe Biden as a superior alternative. Moderate Congressman Jim Himes (D-Conn.) echoed those sentiments, asking, “How would Elizabeth Warren play in Ohio?” Given that Himes is far to the right of Warren, it’s clear that his implied opinion is, “not great.”

There is something about Warren that is particularly off-putting to conservative men. Some have called it an “in your face persona.” Others say she’s “shrill.” Who can forget the “Nevertheless she persisted” moment from Senate Majority Leader Mitch McConnell (R-Ky.) earlier this year? It’s clear that many on the Right are quick to criticize her for things they wouldn’t criticize in others. It’s hard to imagine this doesn’t have something to do with her being a woman.

Boston.com put it this way: “As much as Massachusetts Democrats adore Warren’s brand of fiery populism, to a certain type of independent voter—let alone a conservative—her rhetoric can seem just as over the top, vitriolic, and off-putting as Trump’s.” These voters tend to be white, and they tend to be men. Though Warren is beloved among her base, she is polarizing. She holds only a 51 percent approval rating in her very blue home state. There is also a large gulf between Sanders’ approval ratings and her own, despite their similar politics. If anything, Sanders is a bit further from the American mainstream than Warren.

Her lips are sealed

While Sen. Kamala Harris (D-Calif.) has visited battleground states and schmoozed with big Hillary Clinton donors, and Sen. Cory Booker (D-N.J.) has been publicly shifting to the left, for Warren, things have largely been business as usual. She has even gone as far as to voice her support for other potential candidates. Last summer, amid speculation that Deval Patrick may make a presidential bid, she offered supportive comments to the former Massachusetts governor. She went on to chide the culture of predicting future candidates, saying, “Horse race to horse race, let’s just see what happens every four years, and let’s get all excited about speculating who’s going to be in the race in four years.” She added, “I get up every day worried about the fights in front of us now.”

If Warren is eyeing the presidency, she certainly has significant challenges ahead. But, the last year has shown us that voters like candidates who stand for something rather than running in opposition to other people’s ideas. Having ideas may make you a lightning rod, but it’s likely that Democrats will need some big ideas to take back the White House.

Elizabeth Warren has big ideas and it’s time to consider her a top-tier presidential contender, even if she won’t admit it.