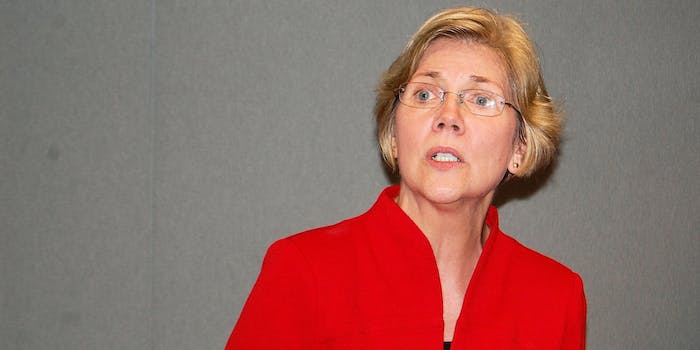 Massachusetts Sen. Elizabeth Warren (D) is known for going after Wall Street banks. But these days she’s focusing like a laser on a new target: Donald Trump.

On Tuesday Warren delivered a blistering anti-Trump speech at the Center for Popular Democracy, where she declared in no uncertain terms that Donald Trump “will never be president of the United States.”

Warren starts by tearing into Trump’s 2006 remarks—which were recently highlighted in a campaign ad for likely Democratic nominee Hillary Clinton—about the potential for the housing market to burst, which it did some months later.

“I sort of hope that happens,” Trump, a billionaire real-estate mogul, said in a recording for his now-defunct Trump University, “because then people like me would go in and buy [properties and] … make a lot of money.”

“What kind of a man does that? A man who will never be president of the United States.”

Trump responded to Clinton’s use of his 10-year-old quote against him at a recent rally in New Mexico.

“I’m a businessman, that’s what I’m supposed to do,” Trump said. “I feel badly for everybody. What am I going to do? I’m in business.”

Warren later criticized Trump’s refusal to release his tax returns and his recent claim that he fights “very hard to pay as little taxes as possible” because the U.S. government “take[s] our tax money, and they throw it down the drain.”

Continued Warren: “Donald Trump likes being a billionaire but he doesn’t think that the rules that apply to everyone else, should apply to him. But let’s be clear Donald Trump didn’t get rich on his own,” she said before listing off a litany of ways taxes have helped Trump grow his wealth.

The Trump-Warren feud started weeks ago, and has mainly played out on Twitter, where Warren’s anti-Trump tweetstorms have become a regular occurrence and where Trump has pushed back against Warren in dismissive tones.

Goofy Senator Elizabeth Warren @elizabethforma has done less in the U.S. Senate than practically any other senator. All talk, no action!