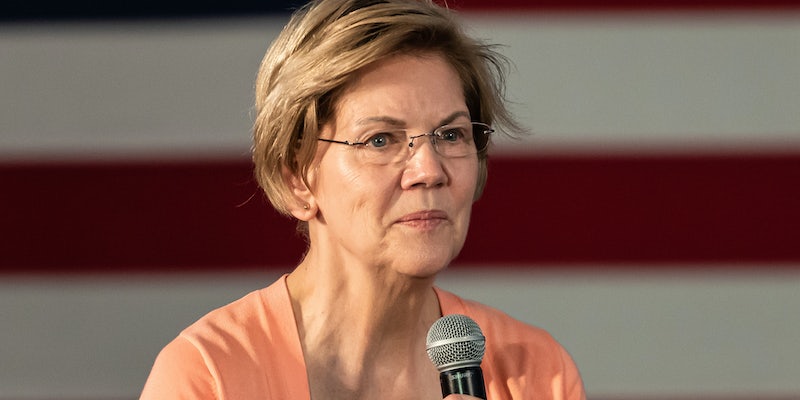 'This information may be used to put women’s health and freedom to choose in jeopardy.'

In an open letter on Monday, Warren and six other senators called on the anti-abortion organization Heartbeat International to explain what information it collects from its thousands of affiliate CPCs across the country.

CPCs, which offer counseling and other resources aimed at dissuading women from having abortions, have come under increased scrutiny in recent months over allegations that they mislead women by appearing to be medical facilities.

The letter states that once pregnant individuals enter such locations, Heartbeat International “collects a significant amount of their personal health care information, which in many cases does not appear to be protected by the Health Insurance Portability and Accountability Act (HIPAA).”

“We fear that, in the wake of the Supreme Court’s Dobbs v. Jackson Women’s Health Organization decision that stripped women of their right to an abortion, this information may be used to put women’s health and freedom to choose in jeopardy, and to put them and their health care providers at risk of criminal penalties,” the letter reads.

The senators say that everything from names, addresses, and phone numbers to “sexual and reproductive histories, test results, [and] ultrasound photos” can be collected during visits.

“Heartbeat International—which is explicitly opposed to abortion rights—appears to be in a position to collect a significant amount of personal information from women about their pregnancies and potential plans for managing their care, but it is not under any legal obligation to maintain the confidentiality of this information, or keep it out of the hands of abortion bounty hunters,” the letter continues.

Among a series of questions, the organization is being asked what information is collected, whether it’s protected by HIPAA, its overall policies towards securing the data, and whether law enforcement agencies have ever requested access to any of the data.

The letter requests that Heartbeat International respond to all questions by Oct. 3.

The senators’ demands come after an in-depth investigation by TIME on the “vast troves” of data collected by PCPs, which legal experts warn could be “weaponized” against women in states where abortion is now illegal.