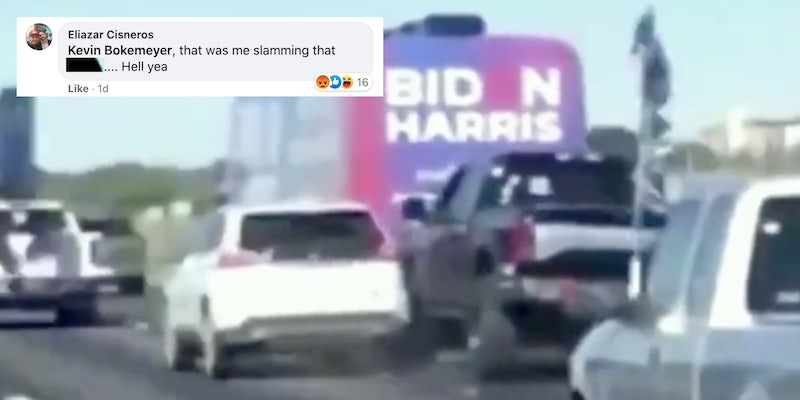 'That was me slamming that f*cker... Hell yea.'

A Texas man has proudly stated online that he was the one who “slammed” into a vehicle on Friday driven by volunteers for the campaign of Democratic presidential nominee Joe Biden.

Video of the incident went viral over the weekend after a parade of trucks with flags supportive of President Donald Trump surrounded the campaign bus on I-35 North between San Antonio and Austin.

At one point in the video, a white vehicle being driven by members of the campaign and one of the trucks collide.

The truck’s driver, Eliazar Cisneros, has since taken credit for the incident in a post on Facebook.

“That was me slamming that fucker…” Cisneros wrote. “Hell yea.”

Cisneros also celebrated the fact that his vehicle made it out of the incident entirely unscathed.

The vehicle driven by the volunteers, however, sustained visible damage, according to photographs posted on social media.

A debate has raged online over what exactly happened, with some arguing that the volunteers’ vehicle attempted to enter the truck’s lane in order to get behind the bus. Others claim the truck purposely swerved.

In subsequent comments on Facebook, Cisneros denied being responsible for what happened but admitted that he “reacted” to the vehicle.

“I reacted because he was running me off the road,” Cisneros asserted.

The Daily Dot reached out to Cisneros over Facebook for comment but did not receive a reply by press time.

The controversial incident only garnered more attention after Trump praised the caravan in a post on Twitter.

“I LOVE TEXAS!” the president tweeted.

Tariq Thowfeek, Texas communications director for the Biden campaign, blamed the parade of vehicles in a statement on Saturday for putting the volunteers “in harm’s way.”

“Rather than engage in productive conversation about the drastically different visions that Joe Biden and Donald Trump have for our country, Trump supporters in Texas instead decided to put our staff, surrogates, supporters, and others in harm’s way,” Thowfeek said.

When questioned by the Texas Tribune about the matter, the Republican Party of Texas denounced what they claimed were attempts “to portray conservatives as violent radicals” by the media before going on to point the finger at unrelated Black Lives Matter protests.

While no arrests were made at the time after the volunteers called 911, CNN is now reporting that the incident is under investigation by the FBI.

The incident is not the first time that Cisneros has made headlines for such politically-motivated behavior. Cisneros used the same truck in September to drive through a protest in San Antonio in an effort to get demonstrators “off the road.”

“I didn’t want to hurt anybody,” Cisneros said at the time. “You know, get off the street, get on the sidewalk and protest whatever you are protesting on the sidewalk. Stay safe.”