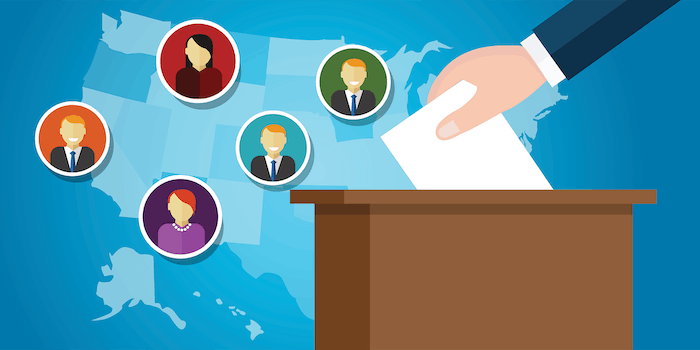 “The mode of appointment of the Chief Magistrate of the United States is almost the only part of the system, of any consequence, which has escaped without severe censure, or which has received the slightest mark of approbation from its opponents.”

So begins Alexander Hamilton in Federalist Paper 68 in defending the Electoral College.

Except he’s wrong saying no one criticized the country’s solution to picking a president.

The delegates at the Philadelphia Convention argued bitterly about how and the Electoral College didn’t emerge until its final weeks through some backroom negotiating—and months after they had already rejected an earlier form of the College.

Towards the Convention’s end, the kindest words that any delegate had about the Electoral College came from its initial architect, James Wilson:

“This subject has greatly divided the House, and will also divide the people out of doors. It is in truth the most difficult of all on which we have had to decide. He had never made up an opinion on it entirely to his own satisfaction.”

These days, Wilson’s ambivalence towards the Electoral College is much more reflective of the American mood than Hamilton’s outward enthusiasm. In 2013, Gallup recorded greater than three-fifths of Americans—Democrats, independents, and Republicans—in favor of amending the Constitution to do away with the Electoral College.

Of course, after the 2016 election, one side had a sudden change of heart.

But the barrier to eliminating the Electoral College has been a lack of consensus on what ought to replace it. It’s the same problem which faced the Framers:

Said James Madison, “There are objections against every mode [of election] that has been, or perhaps can be proposed.”

And George Mason, “In every stage of the Question relative to the Executive, the difficulty of the subject and the diversity of the opinions concerning it have appeared. Nor have any of the modes of constituting that department been satisfactory.”

But there are alternatives.

Let’s start with the most divisive option, which the Framers derisively rejected:

But the objection to the popular vote these days isn’t so much whether Americans are capable of judging candidates on their merits as much as whether Democratic cities will vote to dominate Republican rural communities.

While it’s true that about two-in-five Americans live in a county with 1,000 or more people per square mile (which the Census Bureau defines as the cut-off for urban), not all of those areas vote uniformly Democratic. Moreover, “two-in-five” is not a majority.

In fact, about an equal percentage of Americans lives in areas with fewer than 350 persons per square mile; and they don’t uniformly vote Republican.

Under the direct popular vote, and based on current voting patterns, the election wouldn’t be decided in the cities or the country, but the swingy suburbs and exurbs.

While Republicans have so far been the most vocal in opposing a national popular vote post-2016, recently, former RNC Chair Michael Steele has begun encouraging Republicans to embrace a direct popular vote.

Another major criticism of the Electoral College hinges on the way American elections rely on first-past-the-post (FPTP), aka winner take all. Not only has FPTP been mathematically proven to entrench a two-party system, but as we’re all too familiar, it allows candidates to win states with less-than majority support.

In 2016, 108 of Donald Trump’s electoral votes were earned by plurality wins—i.e. less than 50 percent—as were 49 of Hillary Clinton’s.

Broadly, ranked-choice voting is currently how Australia holds elections. Voters choose either parties or candidates by order of preference. If no candidate has secured a majority on the first count, the votes for the candidates receiving the fewest votes are redistributed according to the voters’ preferences; and this continues until a person achieves a clear majority.

Maine will be the first state in the U.S. to experiment with this at the federal level in 2020; and it seems particularly fitting that Maine should do so, given that it (and Nebraska) already award electoral votes close to how the original architect of the Electoral College intended.

“[T]he Executive Magistracy shall be elected in the following manner: That the States be divided into — districts: and that the persons qualified to vote in each district for members of the first branch of the national Legislature elect — members for their respective districts to be electors of the Executive Magistracy” –Motion by James Wilson, Journal of James Madison, June 2, 1787.

In its earliest form, the Electoral College would have required states to vote for the President by “divisions.” This is roughly how Maine and Nebraska currently award electors. Candidates get one vote for every congressional district they win, and then two votes for winning the state-wide vote. The advantage of this system is that it preserves the preferences of distinct communities and results in outcomes that generally mirror the popular will.

For example, Hillary Clinton won all of Virginia’s 13 electoral votes in 2016 by a plurality. However, if Virginia had used the Maine-Nebraska method, she would have won 7-6.

However, this method is prone to being vulnerable to gerrymandering, whereas simply awarding all votes based on the state-wide outcome is much less so. Taking the example of notoriously gerrymandered North Carolina, where Donald Trump only won by plurality, he still would have taken 12 of its 15 electoral votes under the Maine-Nebraska method.

Internationally, proportional voting is the most common national-level voting method, with over 100 nations either using it exclusively or in combination with other forms.

Where FPTP is deficient by allowing candidates with less-than majority support to claim victory, and where state-wide winner-take-all methods used in almost all states wholly deprives many constituencies of having their views represented in the election, allocating electoral votes in proportion to the state-wide vote removes both deficiencies.

Moreover, it removes the threat of having gerrymandered districts distorting the popular vote. Finally, it opens up the possibility for third-party candidates to earn some number of electoral votes.

And just as the national popular vote would expand the electoral battleground, so too would using a state-level proportional method. Republicans would earn votes from New England and the coasts, Democrats from the South and Midwest.

In a proportional popular, instead of 0 electoral votes going to Trump in California, he would have earned 18, and perhaps considered campaigning in a state already written off as a loss.

Elections would no longer be determined by a select few states. Instead, every state would be crucial to victory.

Of course, in a more fair system like this, in 2016, the vote would have been more representative of the divided nation, with Trump getting 267 electoral votes and Hillary 265, with the rest going to third parties.

Carter grew up in the Virginia suburbs of Washington, D.C. He received degrees in Political Science and Communications from Emory & Henry College in Emory, Virginia. He worked for Congress and the U.S. Department of Veterans’ Affairs before moving to Canberra, Australia in 2013, where he currently lives.