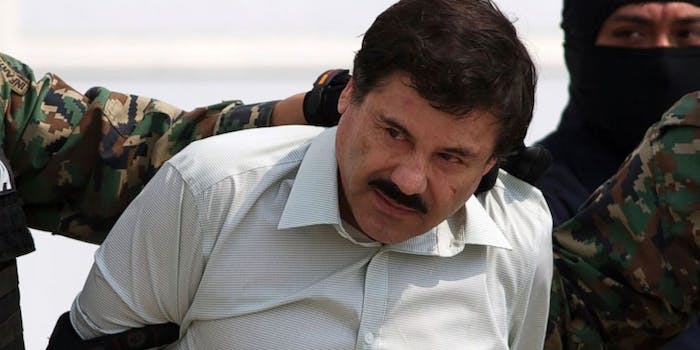 Guzmán, the most powerful drug dealer in the world, had been on the run for 7 months.

One of the most wanted men in the world, Guzmán was apprehended in a pre-dawn shootout with navy forces in the city of Los Mochis, Mexico. Five suspects were killed and four were taken into custody. One marine suffered non-threatening injuries.

“Mission accomplished,” Mexican President Enrique Peña Nieto tweeted on Friday. “We have him.”

Guzmán, who was born in Badiraguato, Mexico, is the head of the feared Sinaloa cartel, a multi-billion dollar narcotics enterprise that supplies much of the cocaine and heroin consumed in North America.

Believed to be in his late 50s or early 60s, Guzmán escaped from a maximum security prison in July—his second such escape since 2001—through an elaborately constructed tunnel, which ran from his shower area to a construction site nearly a mile away in a Santa Juanita neighborhood.

Guzmán is nicknamed “El Chapo” (“Shorty”) due to his 5-foot, 6-inch stature. As leader of one of the world’s most powerful and violent drug cartels, his wealth is estimated at around $1 billion.

DEA is extremely pleased at the capture of Chapo Guzman. We congratulate the MX Government and salute the bravery involved in his capture

The U.S. government is expected in the coming days to make a strong case for extradition to the United States.