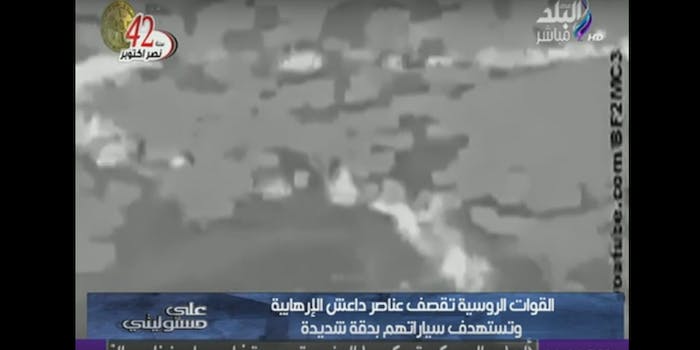 Fact-checkers really ought to read the “show more” section on YouTube.

Every news outlet makes mistakes from time to time. But few are quite like this.

Ahmed Moussa, host of the show On My Responsibility for Egypt’s Sada El-Balad channel, was presenting a segment about air assaults carried out by the Russian military against Islamic State (ISIS) ground targets in Syria, strikes that President Vladimir Putin has defended as necessary steps to stabilize the legitimate Syrian government.

Moussa was correct in that Russians were involved in the production of the combat footage he presented on television, but it was game developers, not members of the military, who were responsible for the video’s contents. Apache: Air Assault was developed by Russian independent game studio Gaijin Entertainment.

Commenters on the YouTube video have pointed out that the pilots in the video are speaking English.

Here’s the original game footage, published on YouTube in December 2010.

This is not the first time that video game content has been mistaken for real-world images by the news media.

In 2011, an ITV documentary about former Libyan leader Muammar Gaddafi mistook footage from military simulator ArmA II as video of the IRA shooting down a helicopter. And in 2012, the BBC mistook the sigil of the United Nations Space Command, the formal name of the Earth’s military in the Halo series, as a logo of the U.N. Security Council.

Then, in 2013, Danish news website Politiken mistook footage taken from Assassin’s Creed, which is set in the Middle East during the Third Crusade, for a picture of modern-day Damascus.

Say what you will about video games, modern-day titles look really, really good.