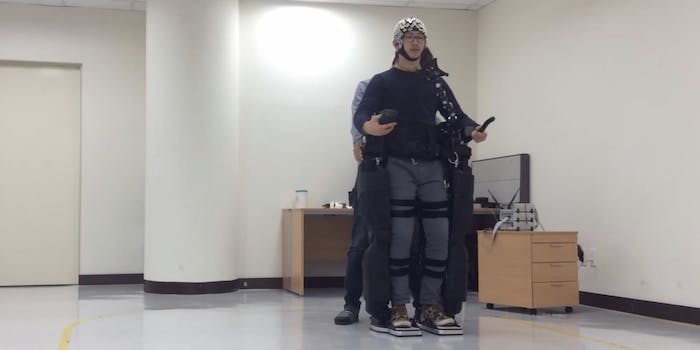 By using LED lights and a cap that reads signals to and from the brain, researchers at Korea University have crafted a robotic exoskeleton that is controlled with vision alone.

The wearer is strapped into a large, clunky exoskeleton while wearing an electroencephalogram (EEG) cap that is constantly measuring brain activity. At the front of the exoskeleton, five LED lights act as visual stimulation. Each light flashes at a different frequency and corresponds to commands for the exoskeleton, like directional movement, standing up, or sitting down.

When the user looks at each flicker of light, their brain reacts slightly differently. The EEG interprets that activity and triggers the computerized exoskeleton to complete the task. A full video attached to the research demonstrates the accuracy of the EEG-powered exoskeleton, and an accompanying paper details their work (PDF).

The research team found that all of the 11 test subjects figured out how to use the large device quickly and easily, meaning so called gait-assistance robots would be simple to operate for people who need help mobilizing their lower limbs.

This research is still in its early stages, but once the technology becomes accessible to people outside a laboratory, it could help give mobility to people who struggle to stand or walk on their own as a result of a stroke or disability that render body parts motionless.