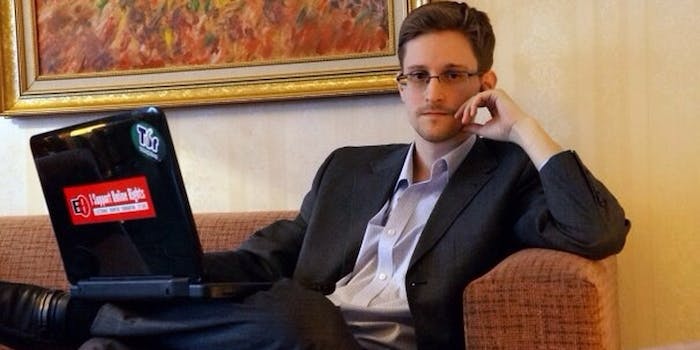 "We are convinced that ... Snowden's whistleblowing has contributed to a more peaceful, stable and peaceful world order."

With the deadline for 2014 Nobel Peace Prize applications approaching this week, National Security Agency Leaker Edward Snowden has received a second nomination for the prestigious award, stemming from the actions he took to expose the extent of U.S. surveillance operations.

A pair of Norwegian politicians hailing from their country’s Socialist Left Party have nominated Snowden, arguing that his actions have helped to preserve trust between nations.

“A peaceful world order depends on trust between nations and trust between people. Peace brokering would be impossible without a basic level of trust,” said Bård Vegar Solhjell, Norway’s former minister of the environment, on Facebook.

Solhjell and fellow socialist politician Snorre Vallen both nominated Snowden just before the Feb. 1 cut-off for applications. Snowden has already been nominated for the 2014 award (which will be given out in October) by a Swedish sociology professor.

Since 1901, the Nobel Peace Prize has been given out to a diverse group of leaders and activist credited with advancing the cause of peace around the world. Martin Luther King Jr., Jimmy Carter and Al Gore are among notable past American recipients. If he were to win the award, Snowden would ironically share the title of Nobel Peace Laureate with President Barack Obama, who just this month reiterated his condemnation Snowden’s actions.

“Our nation’s defense depends in part on the fidelity of those entrusted with our nation’s secrets,” the president said at a press conference to announced surveillance reforms precipitated by Snowden’s leaks. “If any individual who objects to government policy can take it in their own hands to publically disclose classified information, then we will not be able to keep our people safe, or conduct foreign policy.”

Even the Norwegians nominating Snowden agree he may have compromised security for some nations, but asserted that the greater good to come from his disclosures outweigh the bad.

“There is no doubt that the actions of Edward Snowden may have damaged the security interests of several nations in the short term,” Solhjell wrote. “We do not necessarily condone or support all of his disclosures. We are, however, convinced that the public debate and changes in policy that have followed in the wake of Snowden’s whistleblowing has contributed to a more peaceful, stable and peaceful world order.”

Since he first disclosed the NSA’s PRISM program last June, Snowden has been on the run as a political exile. After a stay in Hong Kong, the former systems analyst fled to Russia where he has been seeking political asylum in more than 20 other countries, all of which have been pressured by the United States to reject his application. In the U.S., Snowden is formally charged with, among other things, violating the Espionage Act of 1917–punishable by imprisonment or even death.