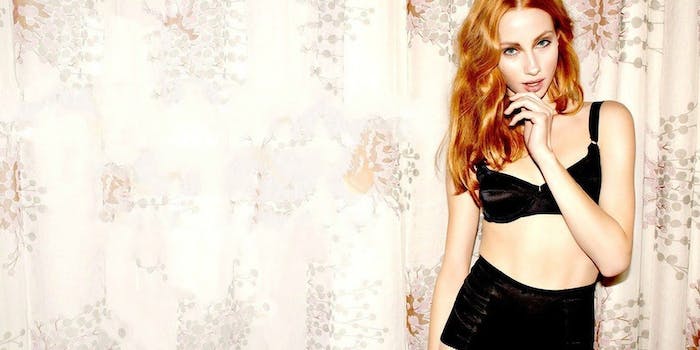 Edward Snowden is the selling point in this lingerie ad

Whether you think Edward Snowden is a hero or a traitor, marketing departments think he's the new James Bond.

Perhaps it was only a matter of time until the NSA and Edward Snowden became references worthy of commercial use. Still, it’s a bit jarring to see big brands riff on news stories even as they develop toward some uncertain and possibly nasty conclusion.

Irreverent diner franchise Denny’s took a stab at topicality in mid-June, tweeting a photo of a snowed-out computer monitor with an oblique reference to shadowy intelligence agencies.

Denny’s knows what you’re craving before they do. http://t.co/PeUlOO3wgd

More recently, an ad for Blush Lingerie, a German purveyor of provocative undergarments, name-checks Edward Snowden himself, informing the whistleblower that there is “still a lot to uncover.” It’s difficult to imagine Snowden saying as much in a suave James Bond accent, but that doesn’t mean it’s not fun to try. Also: no confirmation on whether Snowden prefers gingers. 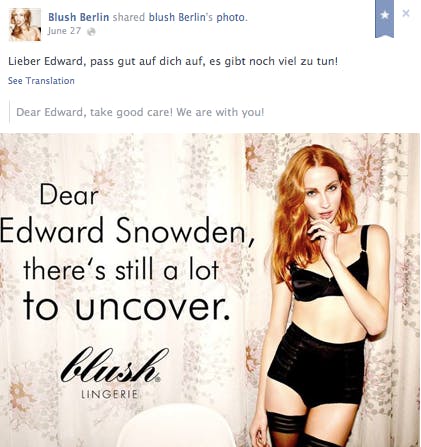 Meanwhile, the Las Vegas Convention and Visitors Authority has found in the NSA scandal a perfect complement to its ongoing emphasis on secrecy and discretion. If what happens in Vegas is truly to stay in Vegas, they’ve reasoned, then it shouldn’t be on the Internet for your employer—or a government analyst—to find.

To that end, the perpetual Las Vegas tourism campaign last October came up with “the Code,” a Fight Club-esque oath promising a limited information blackout. Nearly 100,000 people have pledged adherence to its terms thus far:

I promise to follow the code of Las Vegas by not tweeting, tagging, posting, telling, whispering, emoting, defining, drawing up, writing about or in any way revealing the all-powerful What Happens Here, Stays Here® moment of me or anyone else in my party to others not on said trip during or at any time after said trip’s duration – i.e.: the moment being the part or parts of the trip that should stay in Las Vegas. The other parts are fine … So sayeth this person.

Using a Facebook app called ReachBuddy, you can apparently “report” those who violate the Code, adding yet another layer of creepy surveillance to the entire experience. Loyalists can also use the hashtag #KnowTheCode—if they feel like tweeting about not tweeting, maybe. It’s only recently that the Vegas advertisers made the link between their Code and the ongoing discussion about security and privacy:

Any information shared regarding #Vegas should be protected from prying eyes and ears. #KNOWTHECODE http://t.co/O9RNI3jjOq

At this point, the PRISM story is helping to sell food, tourist attractions and underwear, but a few markets remain untapped: Aeroflot Airlines, for one, ought to unveil their “Fly Like a Spy” slogan as soon as possible.