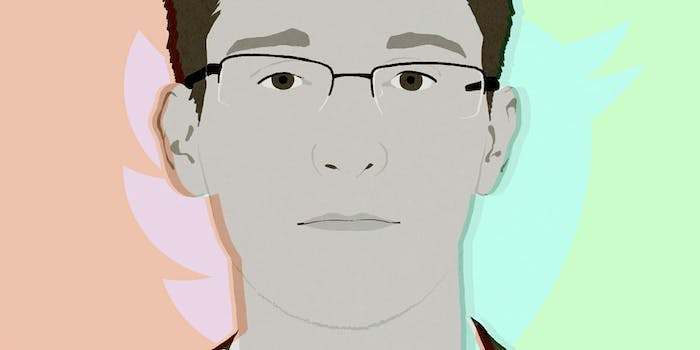 Edward Snowden is officially on Twitter under the verified handle @Snowden. And he’s already cracking jokes.

In good humor, the international fugitive and celebrated U.S. government whistleblower popped online with a single message—“Can you hear me now?”—the incessant catch-phrase of that Verizon Guy, who annoyed American television viewers for nearly a decade with his persistently awesome cellphone reception. But the joke goes much deeper than that.

Can you hear me now?

The first story gleaned by journalist Glenn Greenwald from the trove of classified National Security Agency leaked by Snowden in June 2013 revealed that the U.S. government had issued a secret order requiring Verizon to provide the NSA with the telephone records of millions of U.S. customers.

Snowden refers to himself on Twitter only as someone who “used to work for the government.” He lists his occupation now as a director at the Freedom of the Press Foundation, an organization that funds and supports free speech and freedom of the press, naturally.

At time of writing, Snowden is only following a single account: @NSAgov, the NSA’s verified account. The agency did not immediately respond to our request for comment.

Some say you have courage, I saw real courage on #Sept11 You are just a traitor who put American lives at risk. https://t.co/RRWtmMzyxE

For his second tweet, Snowden exchanged words with famed astrophysicist Neil deGrasse Tyson. “Thanks for the welcome,” Snowden said. “And now we’ve got water on Mars! Do you think they check passports at the border? Asking for a friend.”

.@neiltyson Thanks for the welcome. And now we've got water on Mars! Do you think they check passports at the border? Asking for a friend.