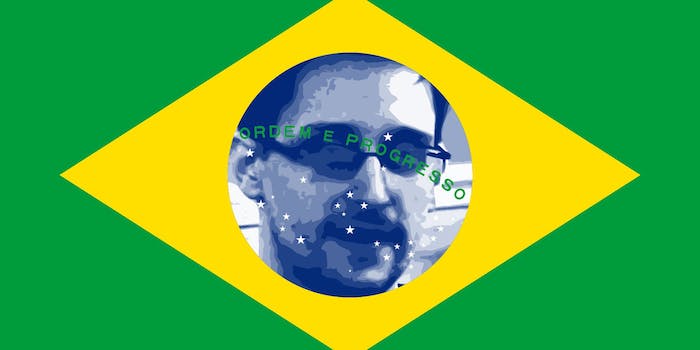 But Brazil's government says it never received his application.

In an interview with Brazilian news channel Globo TV, the former National Security Agency contractor, who leaked millions of top-secret documents, said how he was currently seeking asylum in Brazil, after submitting a formal application with the country’s government last year.

Snowden is currently living at an undisclosed location in Russia after being granted temporary asylum when he outed himself as the source of the explosive NSA leaks in 2013. His visa runs out in August, and without valid travel documents, it’s unclear where the 30-year old Hawaiian will go.

In the interview, Snowden is told that the Brazilian government claims not to have received his application for asylum. “That’s news to me,” he responds.

He’s previously applied—and been rejected—for asylum in almost two-dozen countries around the world. At one point, Ecuador (whose British embassy is currently host to fugitive WikiLeaks founder Julian Assange) looked certain to take Snowden in, but the South American nation since moved to distance itself from the whistleblower last summer, describing the documents issued in his name a “mistake.”

In November 2013, Germany clarified that it would not consider offering Snowden asylum, even in exchange for testimony into the U.S. government’s controversial surveillance programs—which included tapping the phone of German Chancellor Angela Merkel.

Though Snowden claimed in the interview that as-yet un-released documents have evidence of covert U.S. spying on Brazilians, he says he will not exchange the documents in return for asylum. In any case, it is believed that Snowden is not even in possession of any copies of the leaked documents, having given them all to the journalists Glenn Greenwald and Laura Poitras while still in Hong Kong in 2013.

ABC News reports that, besides Brazil, Snowden says he has formally applied for political asylum in several other countries.

Snowden’s attorneys are also reportedly negotiating his return to the United States. U.S. Secretary of State John Kerry has offered to fly Snowden back to the U.S.—but its unlikely the whistleblower will take Kerry up on this offer, after the politician called him a “coward” and a “traitor,” and vowed he would stand trial for his actions.

Daniel Ellsberg, whistleblower behind the leak of the so-called Pentagon Papers, has urged Snowden not to return, arguing in the Guardian that he would not receive a fair trial.