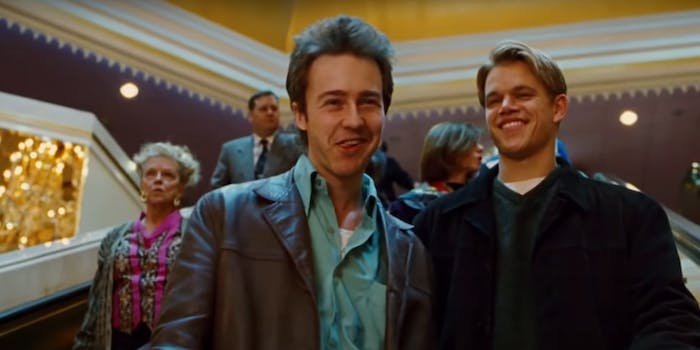 The 'Rounders' star penned a detailed thread filled with references.

The internet didn’t ask for Edward Norton for a detailed analysis of President Donald Trump’s relentless attempts to overturn the results of the election. But that’s just what it got.

In the wee hours of Friday, the Rounders star penned a Twitter thread breaking down his idea of Trump’s true motive for trying to cling to the presidency that he lost to Democrat Joe Biden earlier this month.

In brief, Norton believes Trump is trying to stay in office to avoid the numerous legal troubles hanging over his head. And people online agree the theory has merit.

“I’m no political pundit but I grew up w a dad who was a federal prosecutor & he taught me a lot & I’ve also sat a fair amount of poker w serious players & I’ll say this: I do not think Trump is trying to ‘make his base happy’ or ‘laying the groundwork for his own network’ or that ‘chaos is what he loves’,” Norton began.

“The core of it is that he knows he’s in deep, multi-dimensional legal jeopardy & this defines his every action. We’re seeing 1) a tactical delay of the transition to buy time for coverup & evidence suppression 2) above all, a desperate endgame which is to create enough chaos & anxiety about peaceful transfer of power, & fear of irreparable damage to the system, that he can cut a Nixon-style deal in exchange for finally conceding.”

Norton, who along with Rounders‘ co-star Matt Damon once famously fleeced Harvey Weinstein at a game, went all-in on the poker metaphor as he continued.

“But he doesn’t have the cards. His bluff after ‘the flop’ has been called in court. His ‘turn card’ bluff will be an escalation & his ‘River card’ bluff could be really ugly. But they have to be called.

“We cannot let this mobster bully the USA into a deal to save his ass by threatening our democracy. THAT is his play. But he’s got junk in his hand. So call him.”

Lest anyone wonder about his real feelings for Trump, Norton then let loose a volley of insults for the outgoing president, calling him “a whiny, sulky, petulant, Grinchy, vindictive little 10-ply-super-soft bitch who no doubt is just throwing a wicked pout fest & trying to give a tiny-hand middle finger to the whole country for pure spite, without a single thought for the dead & dying.

“But,” the notoriously mercurial (and arguably verbose) Fight Club actor raged on, “his contemptible, treasonous, seditious assault on the stability of our political compact isn’t about 2024, personal enrichment or anything else other than trying to use chaos & threat to the foundation of the system as leverage to trade for a safe exit.

Norton concluded on a somewhat more uplifting note, expressing his trust in the resilience of American democracy, though he couldn’t resist a parting shot at Trump.

“Faith in the strength of our sacred institutions & founding principles is severely stretched…but they will hold. They will. He’s leaving, gracelessly & in infamy. But if we trade for it, give him some brokered settlement, we’ll be vulnerable to his return. We can’t flinch.”

It’s not much of secret that Norton opposes Trump—his Twitter makes that quite clear—but liberals were equally surprised and impressed by his damning indictment of the soon-to-be-ex-president.

The actor quickly climbed the Twitter trends as his thread racked up thousands of retweets and likes.

“Damn. Edward Norton has completely knocked this out of the park,” tweeted James Kosur of Democrat super PAC Really American.

Elizabeth de la Vega, a former federal prosecutor, tweeted that Norton was “absolutely right.” “Trump is desperate, trying to buy time, and making it up as he goes along. He’s a criminal on the run,” she added.

Perhaps Edward Norton should consider a side job in punditry.