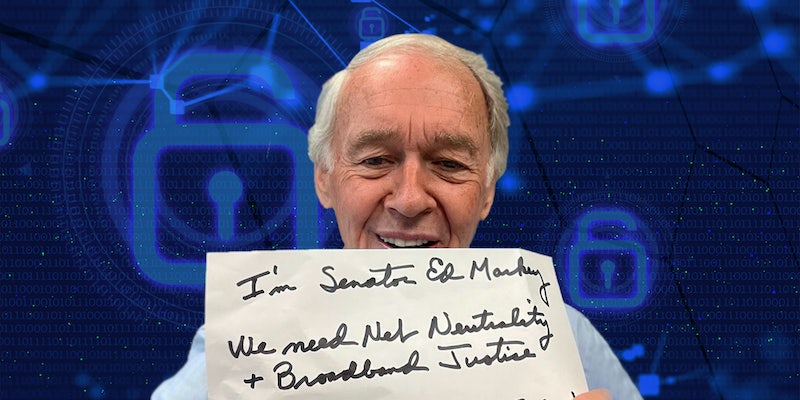 Despite Democratic control over the Senate, the bill faces an uphill climb.

But the legislation, dropped just a few months before the 2022 midterms, faces an uphill climb. Not only are there precious few months before Republicans potentially regain control of the House of Representatives, the Senate has also been unable to confirm President Joe Biden’s nomination of Gigi Sohn to the Federal Communications Commission, which would enforce any net neutrality legislation.

However, Markey, along with Sen. Ron Wyden (D-Ore.), said that “in 2022, broadband is not a luxury, it’s essential” and said that they would not rest until they got the bill passed.

Wyden said that the introduction of the bill would help up the ante on the Senate to also get Sohn confirmed.

The Net Neutrality and Broadband Justice Act will be introduced in the Senate by Markey and Wyden and is being co-sponsored in the House by Rep. Doris Matsui (R-Calif.).

Markey said his bill was all about how “essential” the internet is to our lives and that if passed, it would “undo the Trump’s FCC’s damaging regulations.”

The legislation would reinstate Title II authority over the internet, allowing it to be regulated like a utility. That would allow the government to be more able to crack down on price gouging, speed restrictions, and potentially a lack of coverage, issues that have all been front and center since the start of the COVID-19 pandemic.

Reinstating net neutrality has long been a policy plank of the Democratic party after then-FCC Chairman Ajit Pai repealed the rules in 2017. Since then, numerous failed efforts have been undertaken by Congress to bring it back. The House of Representatives used the Congressional Review Act to try and overturn the FCC’s ruling, only for it to stall in the Republican-controlled House at the time.

The bill, Markey said, would help rein in big social media companies, challenge big telecom, and keep the internet open for social media users to tell their stories online and “have their voices heard” on issues like gun violence and reproductive health.

After the repeal in 2017, several states introduced their own net neutrality bills. California’s, which is considered the strongest, faced pushback and lawsuits from the telecom industry, but it eventually triumphed. It goes further than previous state laws and bans zero-rating, which allows telecom companies a leg up by prioritizing their apps

Markey noted Congress’ recent investments in broadband and said the time was right to “seize this opportunity” to make sure America’s internet works for everyone.

“We should be the leader and not the laggard,” Markey said.