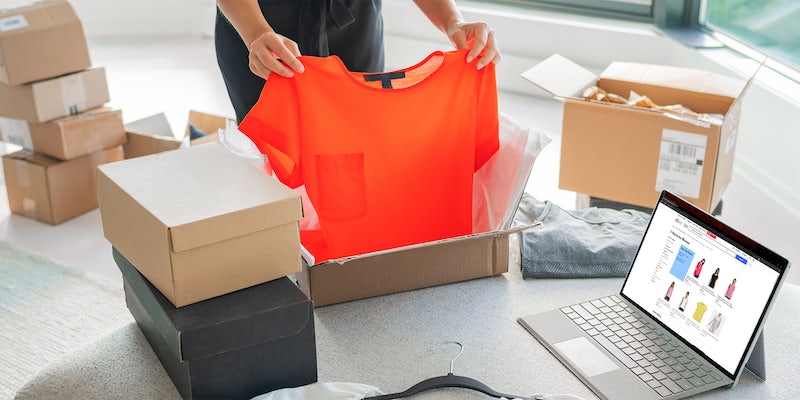 As the price of gas, food, and rent soars, Americans like Alessa Kutten-Cottrell scan their closets and garages in a modern-day version of rummaging under couch cushions for spare change.

The 38-year-old preschool teacher turned speech-language pathologist will find something she doesn’t need from the back of her closet, snap a few pictures, and put it up for grabs on online marketplaces. If she’s lucky, it will sell and she’ll ship it off to a new home in exchange for extra money for bills.

“I’m just trying to sell old things that I’ve accumulated over the years,” Kutten-Conttrell said to the Daily Dot. “Like used clothes, or items that probably would be going in the landfill.”

She enjoys the extra money and gets a kick out of helping people rediscover discontinued items that aren’t available anymore, like a favorite pair of pants from a store that went out of business.

“As the years go on, those kinds of things become harder and harder to find, so it’s kind of fun to have a unicorn,” said Kutten-Cottrell, who says she’s earned about $2,000 from e-commerce sales this year. Almost all the transactions are for less than she originally paid for the items, but she enjoys the dopamine high from getting money for her old stuff as she transitions into a new career.

But Kutten-Cottrell and many other casual resellers might soon call it quits on their reselling hobby due to a new tax reporting requirement. They’re worried they’ll be forced to hire an accountant or even end up paying the government more taxes than they actually owe.

As part of the American Rescue Plan, third-party e-commerce platforms like eBay, Poshmark, Mercari, Depop, and Tradesy will now have to issue a 1099-K tax form to anyone with a total revenue of more than $600 on their websites. In the past, the platforms only gave tax reporting forms to sellers who operated at a larger scale, those who brought in $20,000 in revenue and had more than 200 sales in one year.

A 1099-K is a tax form now common in the gig economy, reporting payments from third parties to people who aren’t employees, at businesses like Uber, DoorDash, and PayPal.

The lower threshold will give the Internal Revenue Service additional oversight on online transactions and prevent businesses and individuals from skipping out on taxes for profit they may have been making. While people like Kutten-Cottrell aren’t making much of a profit, the sale of secondhand items can be big business for part-time or full-time “resellers” who build six-figure careers by sourcing items at thrift stores or purchasing in bulk from close-out retail sales.

Individuals have always been legally required to declare their profits on secondhand marketplaces, but there’s been little oversight for accounts with revenues under $20,000—until now.

Last year the Department of the Treasury announced a need for a “more robust attack” on the tax gap, the difference between taxes owed and the amount actually collected. The government estimates it to be about $600 billion dollars.

The Department of the Treasury projects greater oversight of third-party transactions will generate an additional $460 billion dollars in tax revenue in 10 years. The lower 1099-K reporting threshold comes at a time when the government shared that half of the tax gap is believed to stem from situations where there is little or no information available to the IRS to verify the truthfulness of tax filings, such as with self-employed or contract-based work.

It’s relatively straightforward to assume gig work like driving a car for Uber or shopping for groceries on Instacart is putting taxable income in someone’s pocket. However, e-commerce platforms don’t know if transactions on their websites are actually profitable. If someone sells a pre-owned item for less money than they originally purchased it for, it isn’t a taxable event, regardless of how much revenue is generated. With no way to decipher which sales are taxable income and which aren’t, the platforms are required to distribute the 1099-K forms to all sellers whose total revenue is higher than $600.

Resellers making a profit and operating as a sole proprietorship can file a Schedule C, a tax form that reports business expenses and losses. However, there’s little direction for non-business sellers who aren’t making income.

EBay reports that 63% of people who sell pre-owned goods on their platform are selling items from around their house.

“The confusion and the complexity start right there,” Mike Dabbs, senior director of government relations for eBay said to the Daily Dot, who added that the platform has already received countless questions from casual sellers confused about what documentation they need to have on hand to prove to the IRS that they didn’t profit from their online sales. In many cases, sellers purchased the items years ago and no longer have receipts.

“How do they show a cost basis for a used item? This is something that the IRS has provided no guidance on,” said Dabbs. “We believe that goods and the sale of used and preowned goods were really an unintended consequence and an overlooked piece of the equation.”

As there is no longer a minimum number of sales in the new reporting threshold, there’s little to differentiate casual sellers from those who operate on the platforms as a business. A casual seller might have paid $899 plus tax for an iPhone 13, but opted to upgrade a year later. They might sell their iPhone 13 on eBay for $600, and will in turn receive a 1099-K for crossing the new threshold. However, they technically lost about $200 on the sale.

If they simply include the 1099-K—which only reports gross sales—in their annual income, they’ll be taxed as if they profited $600 from eBay, when in reality they lost money.

To avoid paying taxes for selling their old things at a loss, casual sellers will have to report how much they lost through selling their preowned items on a Schedule D, a form for taxpayers to typically compute capital gains and losses. They’ll need to keep good records about how much they originally spent for the item, shipping costs, fees paid to eBay, and expenses for packing and shipping supplies.

Many casual sellers feel they’ll need to hire a tax professional to properly navigate the process, which could cost a few hundred dollars.

Retired mother Diane Wood doesn’t have it in her fixed budget to hire a CPA for her online sales. She spends her free time on eBay, Poshmark, and Facebook Marketplace selling her now-married son’s belongings from his room, as well as clothes from her closet that she never got around to wearing.

“I’m not doing enough business to have somebody do bookkeeping for me,” she said. “It’s a part-time hobby right now to help me clean my house because I need to downsize.”

While she’ll continue selling this year, she’s anxious about navigating the 1099-K form she’ll receive. If it’s too complicated to manage on her own or significantly raises her taxes, she plans on quitting.

Ecommerce platforms are bracing to lose millions of sales due to the new 1099-K reporting requirements. EBay commissioned a survey of small sellers at the start of the year and reported that 69% of survey respondents said they are likely to stop selling online or sell less online based on the new requirements. The survey also found a disproportionate impact on communities of color.

It reported that 60% of African Americans and Hispanics who sell under $20,000 a year on online platforms do so to help pay for necessary expenses, compared to 47% of the representative sample.

Carol Craig, a 70-year-old retired divorce, said she’s giving up on her hustle of selling vintage glassware and CorningWare online to make money to “exist” every month while living on Social Security. She’s now in the process of giving her eBay inventory to her daughter, concerned about managing the tax implications with her Social Security.

“What am I really getting out of it?” she asked. “Not much, by the time you figure out what you sold and what you paid for it and how much it cost you to ship and all that. It’s really not worth it. It makes it difficult for anybody who’s trying to put a few extra dollars in their pocket to be able to buy food for their family or put gas in their car to get to work.”

This spring, eBay founded a lobbying organization called the Coalition for 1099-K Fairness, which united eBay, Etsy, Mercari, OfferUp, Poshmark, Reverb, and Tradesy in an effort to repeal or modify the lower reporting threshold. The group aims to protect “casual online sellers and micro businesses from unfair tax and privacy burdens.”

“We thought it was really important to make it official and have a united mechanism to show policymakers the scope of the impact,” said Dabbs. “It’s so important who is being impacted, and it’s not wealthy, sophisticated taxpayers. A lot of people sell online because they need the extra money.”

The Coalition for 1099-K Fairness has political support from both sides of the aisle. Sen. Bill Hagerty (R-Tenn.), who is on the Senate Banking Committee, introduced the Stop the Nosy Obsession with Online Payments (SNOOP) Act, a bill to revoke the provision requiring third-party payment platforms to report business transactions of more than $600.

In March, a group of Democratic lawmakers, including Rep. Chris Pappas (D-N.H.), Rep. Cindy Axne (D-Iowa), Sen. Maggie Hassan (D-N.H.), and Sen. Krysten Sinema (D- Ariz.), introduced legislation to raise the threshold for the 1099-K reporting from $600 to $5,000, a modification the Coalition for 1099-K Fairness supports.

“Raising the reporting threshold will ensure sellers of used goods are not subject to burdensome or confusing reporting requirements, which could result in overpayment as well as ineligibility for certain tax benefits,” said Pappas in a statement.

According to eBay, a $5,000 threshold would significantly reduce the number of 1099-K forms distributed for nontaxable events.

“We need to take away the pain for the vast majority of the people who are going to unnecessarily receive this,” said Dabbs.

But some resellers support greater tax oversight on e-commerce platforms. Mark Tew is a reseller and licensed CPA who operates a YouTube channel about e-commerce tax filing. Tew has encountered many profitable resellers who weren’t aware they needed to file income taxes.

Tew feels the e-commerce platforms will have to make major bookkeeping adjustments due to the new legislation, which is partly fueling their lobbying efforts.

“It’s going to be one big burden on companies like eBay who now have to process maybe millions more tax forms and send them out to their people who are using the platform,” said Tew.

EBay announced in August that they have partnered with TaxAct, a DIY tax preparation service and launched a Tax Information Center for eBay Sellers to “help untangle the impact of the new threshold for the Form 1099-K and provide information and support” to file taxes.

In the meantime, many casual sellers are keeping a watchful eye on their accounts as they cautiously approach the $600 threshold, contemplating if the extra paperwork will be worth it.

It may indeed be easier to sift through couch cushions.

Nikki Davidson is a multimedia journalist based in California who has reported on finance, healthcare, politics, and military subjects for digital media publications and TV stations across the country for more than a decade.