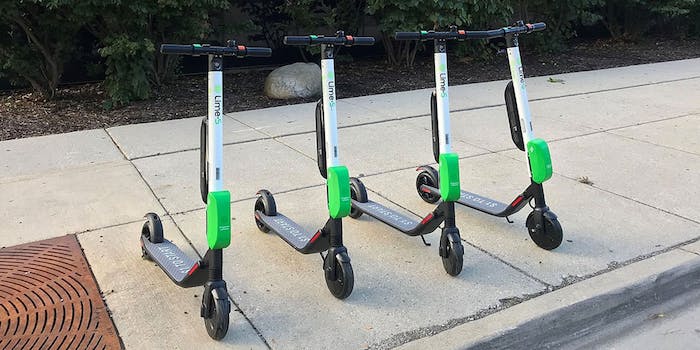 The good, the bad, and the ugly.

The e-scooter market is exploding. Whether its a new fleet arriving in a city near you, the latest devastating crash, or a flurry of scooter hacks, the two-wheeled contraptions are everywhere.

You may see e-scooters as a reliable transportation method cutting down on traffic and emissions. You may see them as dangerous metal nightmares always gunning for your shins on the sidewalk. Maybe you’ve never even ridden one but wonder at the chaos they bring.

Either way, the last few weeks have brought a deluge of e-scooter news you need to know. Here’s the good, the bad, and the ugly.

Arguably the biggest name in e-scooters, Bird, is taking steps to improve its product. The company announced Thursday that next week it plans to launch the “Bird Two,” its next-gen model.

Aside from a sleek new design, the Bird Two comes with a 50 percent larger battery than the Bird One, providing riders with longer ride times in between charges.

The scooter also comes with damage sensors that will alert the company when it needs to be repaired. Speaking of damage, the Bird Two includes puncture-proof tires to keep you safe from sidewalk nails or vandals hellbent on banishing e-scooters from their city.

Screws are no longer visible on the scooter as well, keeping riders safe from getting gashed (yes, it happens) and scooter thieves from stealing parts.

The Bird Two even comes with a fancy new kickstand that will make it much harder to tip over.

It comes with all the bells and whistles: anti-theft features, a bike-handle style braking system, and a battery that can last up to 37.5 miles on a charge.

Ford plans to deploy those scooters to 100 cities by next year, with 15,000 units ready to land this month in Berkeley, Denver, Kansas City, Los Angeles, Memphis, Minneapolis, Portland, and Washington D.C.

If you love e-scooters, a new option may be coming to your city very soon. If you hate them, well, it looks like you’ll have a new type of scooter to avoid.

Bike rider hospitalized by e-scooter in hit and run

A bike rider in Chicago is taking legal action after being knocked unconscious and hospitalized following a crash with an e-scooter.

32-year-old Allyson Medeiros says he was hit head-on by a scooter rider who was headed in the wrong direction. A GoFundMe page for Medeiros says he sustained not only multiple breaks and lacerations all over his face requiring 20 stitches, but “a dangerous amount of air in his chest cavity” as well.

Medeiros doesn’t know who hit him and is also unsure what brand of e-scooter was involved. Medeiros’s lawyer has filed a petition in court demanding that a judge order the city and whichever scooter company has information on the crash to hand over data on the unknown rider.

E-scooters aren’t the only electric transportation items available on city streets–e-bikes are also here. They also have batteries, and, just like e-scooters, those batteries can catch fire.

That’s exactly what happened in San Francisco this week. Twice actually. Two batteries on e-bikes from Lyft apparently caught fire, leading the company to halt its e-bike program in the city.

Lawmakers aren’t too happy either and are asking Lyft to find out what happened.

“Biking alone can be hard and unsafe, the last thing you need is a flaming bike as you’re riding down the street,” said Supervisor Vallie Brown.

In just 2018 alone, Consumer Reports found 1,500 cases across the country in which an e-scooter caused injury. Given all the fire and mayhem caused by electric transportation methods, e-scooter companies are placing more importance on safety. Earlier this month, rivals Bird and Lime joined together to establish a safety advisory board to create guidelines that could help local cities shape regulations.

Lime and Bird are not only seeking to increase safety but to fix their bruised and battered public images in the process.

What do you do when your city’s streets are flooded with e-scooters? Innovate! That’s what Scootscoop did, a San Diego-based startup company that tickets and impounds e-scooters left on private property.

The company was started by a repo man and a bike-store owner who were tired of e-scooters getting in the way of bikers.

Bird, like its fellow e-scooter companies, is doing anything and everything possible to stop hemorrhaging cash. E-scooters haven’t proven to be all that profitable and companies are looking for any way to make a buck.

Enter Bird and its monthly e-scooter subscription service. The Verge‘s Nick Statt tried out the service and said it had the potential to be amazing but instead…sucked. Why? Because you can only use “a dinky, slow scooter with about 50 percent of the battery capacity.”

Statt argues that if the service instead offered top-of-the-line scooters with increased battery life and speeds, more people might be willing to fork over $24.99 a month.

“It lasts me, on average, about 7.5 to 8 miles on a charge,” Statt writes. “That means I could make the 2.2-mile ride to my office and back two days out of the week, and it would require a full overnight charge.”