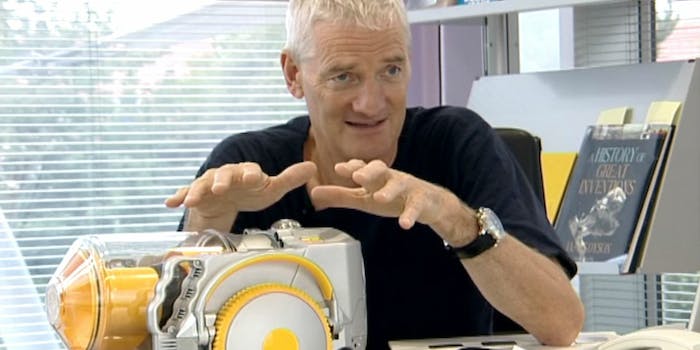 With the advent of electric cars and promises of self-driving vehicles, technology companies have all of a sudden become major players in the future of the automotive industry. Google, Lyft, and Uber are just a few Silicon Valley giants spending millions (or billions) of dollars to bring either electric or self-driving vehicles to the road.

As the pool of participants expands, surprising new players rear their heads. But the latest entry, reported today by the Financial Times, caught everyone off guard.

Dyson, known for slick vacuum cleaners and household appliances, will reportedly spend $2.8 billion to create a trio of electric vehicles that can rival Tesla models, according to the report. Creators of the first bagless vacuum cleaner, Dyson isn’t approaching electric like others. It wants to use solid-state batteries, which are thought to be a lot safer than lithium-ion cells and could have improved energy density.

Like Tesla, the first car Dyson releases will reportedly be a high-end model, designed to “establish a route to market, supply chain and a potential customer base,” the report states. It is expected to have a low production run while the second and third models will be made in greater numbers and cost less.

This isn’t the first time we’re hearing about Dyson’s plans to enter the automotive industry. In 2016, an error from the U.K. government spilled the news in national infrastructure documents.

“The government is funding Dyson to develop a new battery electric vehicle at their headquarters in Malmesbury, Wiltshire. This will secure [$245 million] of investment in the area, creating over 500 jobs, mostly in engineering,” the report said.

James Dyson just announced to @Dyson employees that we’ve begun work on a battery electric vehicle, due to launch in 2020. pic.twitter.com/yUZNvIsYIi

The company came clean (sorry) for the first time in September, revealing in a letter to employees that it has 400 people working on the project at its headquarters near London. At the time, Dyson said its first car, due in 2020, won’t be a sports car but will be “radically different” from current models on the market.