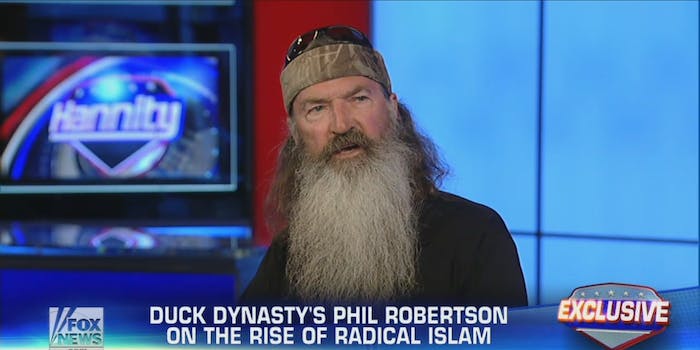 You really shouldn't read his comments if you're eating.

Proving that he’s a solidly Old Testament guy, Duck Dynasty star Phil Robertson recently delivered a graphic and vulgar hypothetical about the rape and murder of atheists to prove the existence of God.

The devout-Christian-turned-redneck-reality-star told a Florida prayer breakfast last Friday that all morality stems from God and that to not believe in God would make any level of violence acceptable. To illustrate his point, Robertson described a hypothetical scenario in which an atheist family was tied up and tortured.

“I’ll make a bet with you,” Robertson said. “Two guys break into an atheist’s home. He has a little atheist wife and two little atheist daughters. Two guys break into his home and tie him up in a chair and gag him. And then they take his two daughters in front of him and rape both of them and then shoot them and they take his wife and then decapitate her head off in front of him. And then they can look at him and say, ‘Isn’t it great that I don’t have to worry about being judged? Isn’t it great that there’s nothing wrong with this? There’s no right or wrong, now is it dude?’”

Robertson kept going: “Then you take a sharp knife and take his manhood and hold it in front of him and say, ‘Wouldn’t it be something if this [sic] was something wrong with this? But you’re the one who says there is no God, there’s no right, there’s no wrong, so we’re just having fun. We’re sick in the head, have a nice day.’”

“If it happened to them,” Robertson continued, “they probably would say, ‘something about this just ain’t right.”

Robertson’s brutal, sadistic rant has already drawn plenty of criticism online, not only for the gleeful way in which he described the theoretical violent attack, but also for the warped view of human morality that it represented—the suggestion that God is the only thing holding people back from committing heinous acts against one another.

Paraphrasing Phil Robertson: "God is the only thing holding me back from raping kids and decapitating women."

So Phil Robertson decided to let us know what he'd be up to if weren't for God keeping him in line. (Trigger warning)http://t.co/74pSKoEptX

Dear World, #PhilRobertson doesn't speak for me… Pat Robertson either.
With Love,
A Christian

The widespread outrage isn’t likely to damage the nearly half-billion-dollar Duck Dynasty franchise, which, in addition to its A&E show, also includes a wide range of merchandise. After all, it’s not like this is the first time Robertson has made these kinds of comments.

The conservative hero first came under fire in 2013 after he was quoted in a Rolling Stone article comparing homosexuality to adultery and beastiality. The article generated substantial controversy, but the only real consequence for Robertson was a nine-day suspension from the show. A&E soon relented after conservatives threatened to boycott the network.