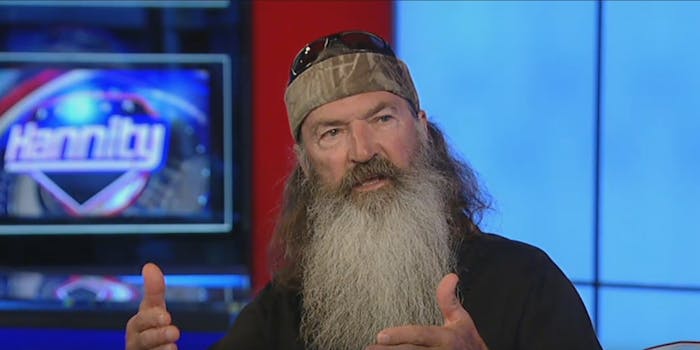 Following the gruesome murder of journalist Steven Sotloff by militants of the Islamic State (better known as ISIS), Fox News host Sean Hannity used his program to weigh in on the severity of the threat posed by Islamic extremism. Joining him was a man well-known for his insightful, eloquent commentary on terrorism, and Islam in general: Duck Dynasty star Phil Robertson.

Robertson, whom A&E suspended from his show for comparing homosexuality to bestiality before bowing to pressure and reversing its decision, was understandably incensed by the Islamic State’s brutal actions. But it’s the ultimatum he laid down to ISIS’ followers that is troubling a lot of people.

“In this case you either have to convert them, which I think would be next to impossible,” Robertson told Hannity. “I’m not giving up on them, but I’m just saying, either convert them or kill them. One or the other.”

The irony of Robertson’s statement, which clearly eluded the speaker, was not lost on Twitter.

This is far from the first time that Robertson has used religious rhetoric to condemn people, whether they be violent extremists or peaceful gay and lesbian Americans. In fact, if you strip out any identifying proper nouns, some of Robertson’s many inflammatory comments start to sound a lot like the rantings of a murderous jihadist.

Can you tell whether each of these statements comes from Duck Dynasty star Phil Robertson or a member of the Islamic State?

1) “Here is a news flash for America. Fame cannot remove your sin. And all of the money you ever amass cannot raise you from the dead.”

2) “Victory is on our side because there is a difference between us and you: we are fighting for a noble cause.”

3) “Sexual sins are numerous and many.”

4) “I never leave home without my [religious book] and my woman.”

6) “Two groups of people, the children of [deity], and the whole world is under the control of the evil one.”

7) “Do you expect to transgress against others and yet be spared retribution?”

10) “If you simply put your faith in [religious figure] … yours and mine and everybody else’s problems will be solved. And the next time we see you, we will say: ‘You are now a brother. Our brother.’ So then we look at you totally different then.”

11) “Soon, by [religious figure]’s permission, a day will come when the [member of a certain religious group] will walk everywhere as a master,”

12) “Neither the adulterers, the idolaters, the male prostitutes, the homosexual offenders, the greedy, the drunkards, the slanderers, the swindlers—they won’t inherit the kingdom of God. Don’t deceive yourself. It’s not right.”