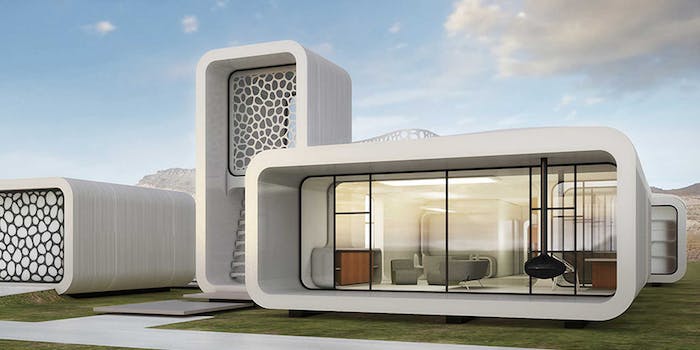 Why not extrude a building in the desert?

For a city whose projects include building islands in the shape of a palm tree and raising the world’s tallest building, the decision to extrude the world’s first 3D-printed office building on a strip of sand beside the ocean is not out of character.

Dubai, an emirate within the United Arab Emirates, is a small, wealthy city on the Persian Gulf, with an economy based not on oil but on trade and finance. Dubai has spent a great deal of its political power and money on engineering and construction projects that attract global attention.

However, the boom that allowed the emirate to do these things took a severe hit with the economic downturn in 2009. Printing a small but complete office building does not make the demands that the monumental buildings did but is still on track to attract attention.

H.E Mohammed Al Gergawi, UAE minister of cabinet affairs, said as much on the occasion of the building’s announcement.

“This building will be a testimony to the efficiency and creativity of 3D printing technology, which we believe will play a major role in reshaping construction and design sectors,” he said. “We aim to take advantage of this growth by becoming a global hub for innovation and 3D printing. This is the first step of many more to come.”

The building will be printed and assembled near Dubai’s Museum of the Future, “a unique incubator for futuristic innovations and designs,” and will function as office collaborative spaces for the museum’s staff.

According to the official announcement, the building will be about 2,000 square feet and will be printed” layer-by-layer using a 20-foot-tall 3D printer, then assembled on site in a matter of weeks.” The building’s furniture, ornament, and structural components will be created the same way.

It’s the first major project by the Museum of the Future and serves as a first step in the city’s apparent ambition to set the bar for such construction in the future. The construction is a venture between Dubai, WinSun Global, and the architecture and engineering firms Gensler, Thornton Thomasetti, and Syska Hennessy. WinSun Global is a joint venture between the Chinese 3D printing technology corporation WinSun and a group of international investors, which has previously printed and delivered a villa-style building for the Egyptian government.

Some estimates allege that 3D printing technology can reduce production times by 50 to 70 percent, labor costs by 50 to 80 percent, and can save between 30 and 60 percent of construction waste.

If the Museum office comes off without a hitch and can prove those numbers, it could in fact put Dubai back on the map for inventive construction, not just dramatic constructions. It could also inspire further experiments with this promising tech.

Screengrab via Museum of the Future