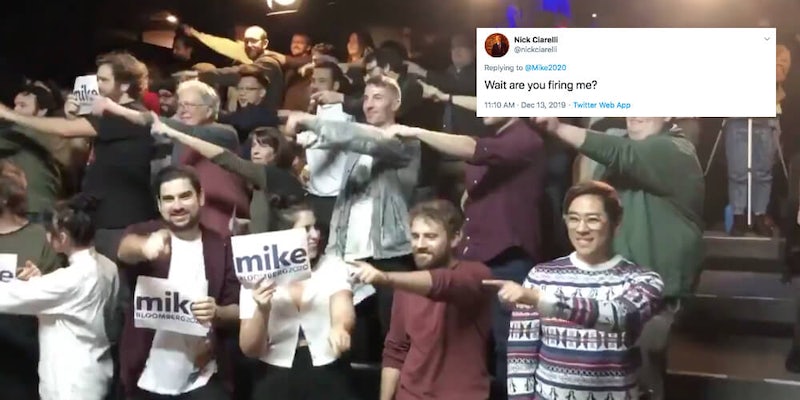 Michael Bloomberg’s campaign team wants to make two things clear: The guy behind the #MoveslikeBloomberg does not have moves like Bloomberg, and he is definitely not one of its interns.

“To clarify, @NickCiarelli is not an intern for our campaign. And he does not have moves like Bloomberg. Nick, apply to work for us here,” Bloomberg’s team tweeted on Friday.

To clarify, @NickCiarelli is not an intern for our campaign. And he does not have moves like Bloomberg.

Nick Ciarelli is responsible for posting the viral video of fake Bloomberg supporters dancing to the presidential candidate’s “dance,” set to Maroon 5’s Moves Like Jagger. Ciarelli changed his Twitter bio to say he was an intern for the campaign. The “supporters” created the dance and are now keeping up with the ruse as part of a comedy bit.

It is a riff on fellow Democratic candidate Pete Buttigieg’s viral High Hopes “dance” that was actually created by a very real intern, the Daily Dot discovered at the beginning of December.

“Look out #TeamPete because us Bloomberg Heads have our own dance! Taken at the Mike Bloomberg rally in Beverly Hills. #Bloomberg2020 #MovesLikeBloomberg,” Ciarelli tweeted, along with the video of the Bloomberg dance.

Even though Bloomberg’s team made it abundantly clear the Twitter hoaxster is in no way associated with its campaign efforts, the show must go on for Ciarelli. He continued the joke by pretending to be outraged over his apparent “firing.”

“Wait, are you firing me?”  he questioned in response to the tweet.

Wait are you firing me?

Fellow comedian Brad Evans got into the mix to fan the outrage, claiming that he is also stepping down as a Bloomberg campaign employee in solidarity with Ciarelli.

“This is disgusting. The Bloomberg campaign can find a new social media coordinator because I quit. This is just one of the many examples of abuse on unpaid interns I’ve heard about. This is no way to run a campaign,” he tweeted, along with the hashtag #DropOutBloomberg.

This is disgusting. The Bloomberg campaign can find a new social media coordinator because I quit. This is just one of many examples of abuse on unpaid interns I’ve heard about. This is no way to run a campaign. #dropoutbloomberg https://t.co/UvxTQdkGE6

The tweets have racked up thousands of retweets and likes, with many comments from people who seemingly believe the Bloomberg campaign treats its employees unfairly.

“@MikeBloomberg all of us back home in NY are pulling for you, but if this is the way you’re going to treat your staff you’re no better than Trump,” one Twitter user wrote in response to Ciarelli’s tweet.

The ball just kept rolling from there, until the hashtag #DropOutBloomberg, which was being used by both Ciarelli and Evans, started trending.

If you’re outraged by the poor treatment of 29-year-old unpaid intern Nick Ciarelli by the Bloomberg campaign, use the hashtag #dropoutbloomberg https://t.co/CXYgbBOjWI

“As the creator of #MovesLikeBloomberg, I disavow it and the Mike Bloomberg presidential campaign. Read the truth about the dance here. #DropOutBloomberg,” Ciarelli tweeted.

As the creator of #MovesLikeBloomberg, I disavow it and the Mike Bloomberg presidential campaign. Read the truth about the dance here. #DropOutBloomberg https://t.co/IJ4ASLzdqz

In the tweet, Ciarelli also included an email screenshot from Evans who was pretending to be Bloomberg’s social media coordinator.

“I’ve just received approval from on high for you to hire 50-60 actors to pose as supporters doing the #MovesLikeBloomberg dance you choreographed. We want to create the impression that enthusiastic young people are excited about Mike and they came up with this infectious dance spontaneously. We’ve blocked out 8 hours for you to rehearse with actors next week, and we can allot $20/actor. They must all sign NDAs. Also, unrelated, we are discontinuing your gas stipend as part of the all-around crunch that has been happening,” the fake email read.

Many following the story online understand the whole thing is a hoax, but some are actually falling for it.

“The world’s 14th richest man might get forced out of the 2020 race by an L.A. improv troupe #DropOutBloomberg,” Twitter user @Will_Bunch wrote.

The world's 14th richest man might get forced out of the 2020 race by an L.A. improv troupe #DropOutBloomberg

Mike Bloomberg's campaign fired an (unpaid?) intern via tweet for posting an enthusiastic dance video. Now the former NYC mayor has lost a social media coordinator. The hashtag for this saga is #DropOutBloomberg https://t.co/URVPVAUn3J

My mom saw the Moves Like Bloomberg video on Rachel Ray and was so tickled by it she texted me to see if I saw it. Had to tell her the campaign fired the intern who created it. She was appalled and said Bloomberg won't be getting her vote. #DropOutBloomberg https://t.co/LU395NsocN

For a guy worth $54B, he has unpaid interns?

“No better way to celebrate an INCREDIBLE first day of work on the Bloomberg campaign than by showing off my #MovesLikeBloomberg. So excited this intern position suddenly opened up. Oh, and @nickciarelli… methinks you left a couple things in your desk,” Twitter user @zachbdunn wrote, along with a video of himself doing the dance.