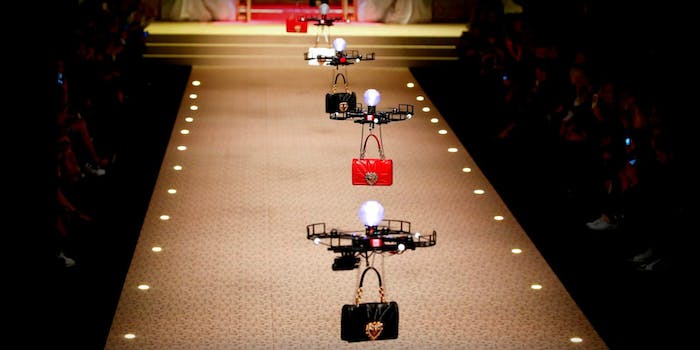 The stunt was delayed 45 minutes so people could turn their mobile Wi-Fi off.

In the growing list of occupations at risk of being overrun by robots, you’d expect fashion model to be toward the bottom.

At least, that was before runway models were replaced by drones at Dolce & Gabbana’s show on Sunday in the latest demonstration of a company using emerging technology as a gimmick to impress (and terrify) audiences.

Floating down the runway carrying overpriced handbags were at least eight quadcopters that, like the hard-working models they replaced, posed in front of the crowd for pictures before gliding their way back to the dressing room. Wanting them to look their best, the Italian fashion brand outfitted each drone with what looks like a fake gemstone.

Two assistants dressed like surgeons flanked the stage as the drones did their routine in case anything went wrong. If videos uploaded to social media are any indication, the stunt, for better or worse, went off (mostly) as planned.

Dolce & Gabbana may have thought it was being trendy, or dare I say fashionable, but we’re not so convinced drones swaying around drunkenly while awkwardly hoisting designer handbags was the right image for the luxury brand.

Nor was it worth the hassle. Fashionista reports attendees were forced to turn off their mobile Wi-Fi and hotspots before the high-tech spectacle could commence. Dolce & Gabbana clearly underestimated how much we cherish being connected to the internet as their demands resulted in a 45-minute delay.

Don’t worry, after they were done showing off the Fall Winter 2018/19 collection, the drones were removed from the stage so humans could go back to making a living.