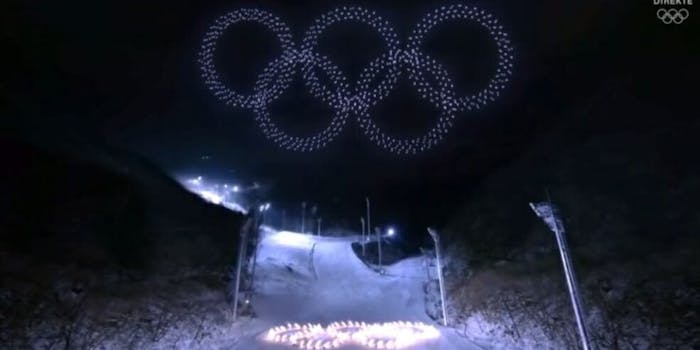 It broke a world record.

One of the most mesmerizing moments of the Winter Olympics opening ceremony on Friday was the image of more than 1,200 drones working in unison to make the image of a snowboarder that then transformed into the Olympic rings.

It was a site that showed just how gorgeous technology can be.

According to AdWeek, Intel broke its own world record for the number of drones used with 1,218, and the idea of the performance was to enthrall.

“Since fireworks in the seventh or eighth century, there has been no alternative option,” Anil Nanduri, the vice president and general manager of Intel’s drone division, told AdWeek. “With drones, you have the ability to fly programmable lights in the city with precision.”

Though the show presented during the opening ceremony wasn’t actually live—it was reportedly filmed in December—the spectacle was impressive.

To pull off the performance, Intel shipped all of the equipment to South Korea in late October and early November for a December flight.

Using Intel’s 3-D animator tools and simulation software, the company choreographed the flight patterns and coded the drones to display a fraction of their possible 4 billion color combinations. As the artists programmed different patterns and lights, the software showed exactly how that would look in the sky without a single drone taking off. For example, the system doesn’t let any two drones exist in the same location.

Depending on the complexity of a given pattern, the process can take between a few minutes and several weeks. In this case, Intel spent several months. After all the planning, the actual programming of the drones is fairly fast, taking just 10 or 15 minutes before they’re ready to fly.

According to Wired, Intel wanted to produce a live version of the stunt for those in attendance at the opening ceremony, but at the last minute, that had to be canceled for what the company called “impromptu logistical changes.”