This rope bridge was constructed entirely by drones

Foundational work in the field of aerial construction, coming out of ETH Zurich.

Research drones in Switzerland can now build a rope bridge on demand, a pivotal breakthrough in the field of aerial construction.

Ph. D. candidate Federico Augugliaro and Professor Raffaello D’Andrea of engineering institution ETH Zurich  have programmed drones to wrap rope together to make a weight-bearing structure that a person can cross like a bridge. In the successful trial demonstrated below, drones build a 24-foot-long rope bridge between two metal scaffolds at Switzerland’s Flying Machine Arena, a portable specialized space of 10 cubic meters used for drone experimentation.

Each drone was outfitted with a specialized mechanism for dispensing Dyneema rope. With extremely well-coordinated airborne movements, they are able to wrap rope around poles, and even tie knots.

The rope bridge is an important demonstration that “small ?ying machines are capable of autonomously realizing load-bearing structures at full-scale and proceeding a step further towards real-world scenarios,” per the researchers’ writeup. In other words, they’ve demonstrated that aerial construction is practical and possible. 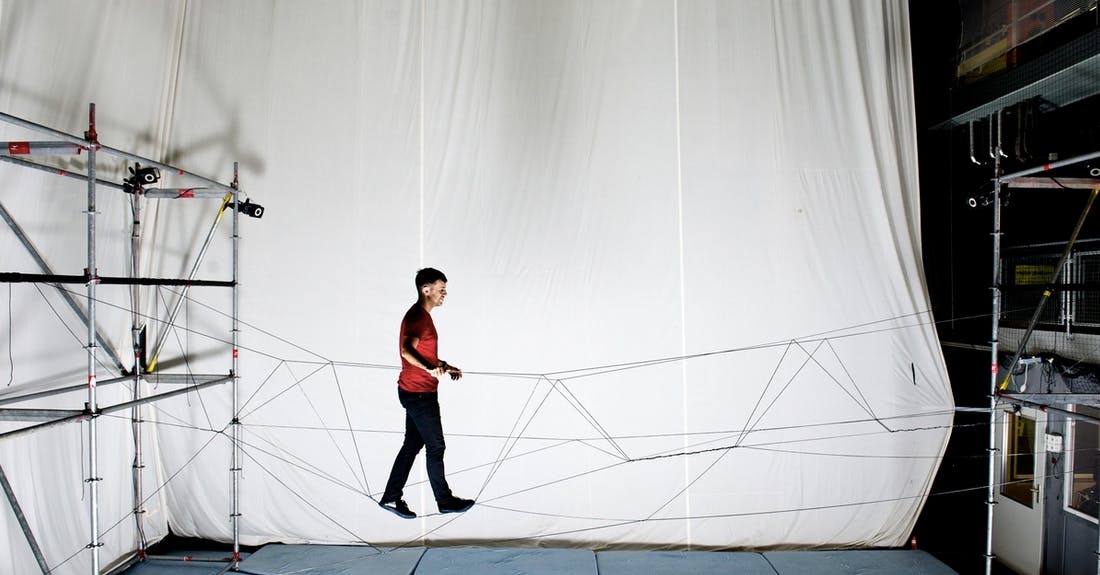 A person crosses a rope bridge woven by cooperating drones.

Drones have a remarkable utility in getting to places that humans simply cannot. They can hover and climb vertically to “reach any point in space and fly in or around existing objects,” but they are limited by their precision. This demonstration was successful because the Flying Machine Arena’s setup makes use of motion capture devices to keep track of each drone’s movements far better than the drones could on their own, and it does so for all of them at once, enabling wild rope-weaving maneuvers like this:

A drone follows a tricky path to wrap rope around a pole.

Though this bridge-building technology isn’t ready to be deployed to the untamed wilds for emergency or military scenarios, those seem the mostly likely spheres to benefit from being able to reach difficult destinations in a pinch.