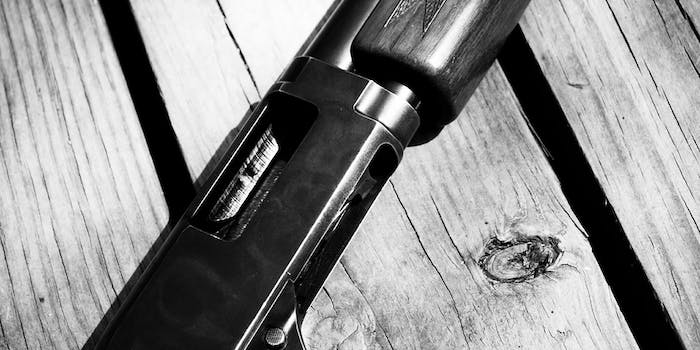 This company is selling ammo designed to take down drones

The line between catchy marketing and corporate responsibility continues to blur.

There are more cameras in the sky today than ever before. Snake River Shooting Products would like to change that. The Idaho-based company  is selling a new brand type of shotgun ammunition that is marketed explicitly for shooting down drones .

The only problem is that the company can’t seem to decide whether it’s joking or not. 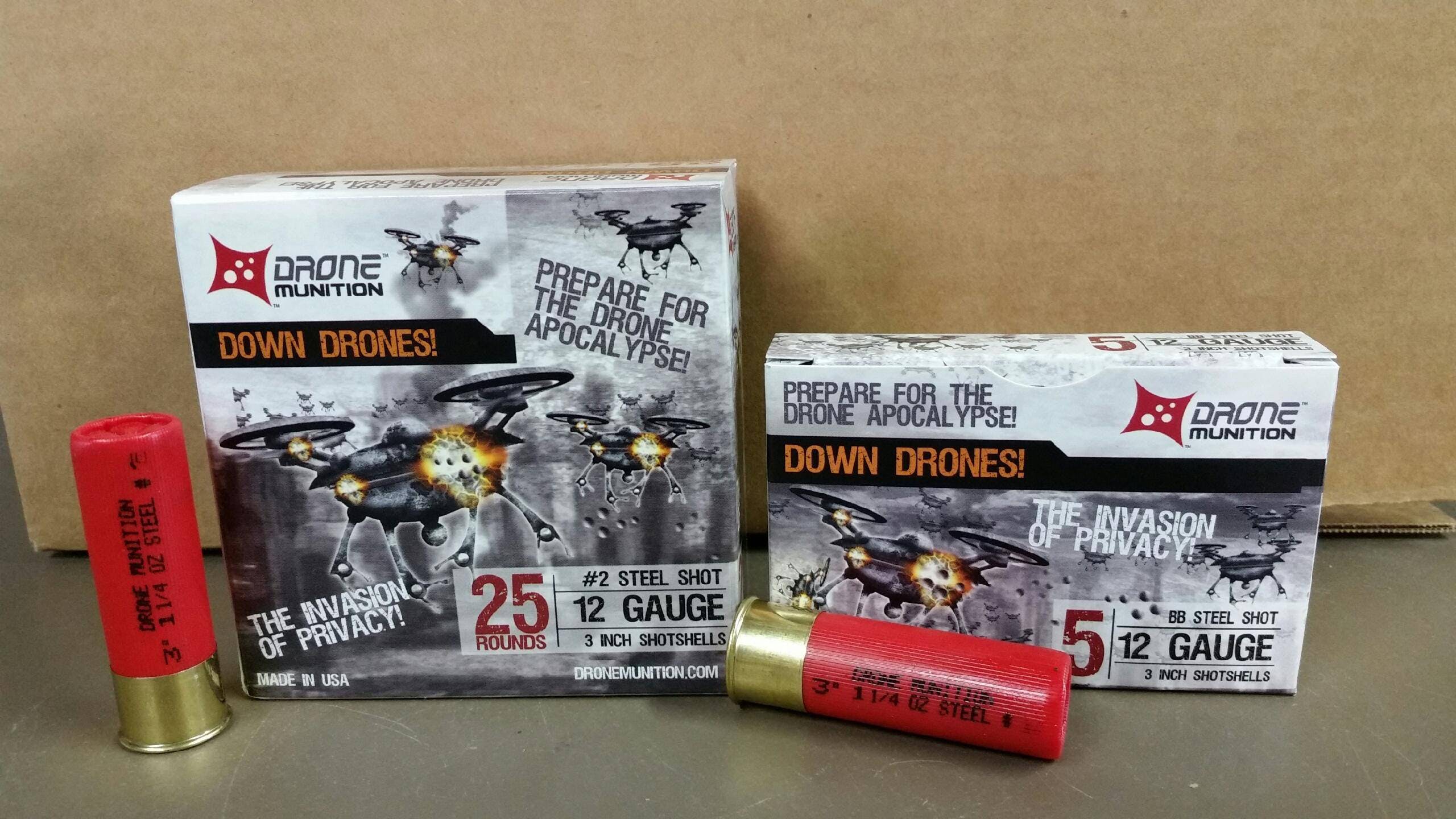 July saw two high-profile incidents involving drones. A Kentucky man shot down a drone during an incident in which he alleges the drone pilot was using the gadget to spy on his 16-year-old daughter. The drone owner later provided video which seemed to cast doubt on the shooter’s story, and the homeowner was placed in custody on charges linked to his discharge of the firearm.

Earlier in the month, drones delayed firefighting efforts as wildfires raged in California, damaging property and endangering lives. State officials later offered thousands of dollars for the names of the pilots.

Criticism over the use of drones has been steadily growing for some time, and Drone Munition is clearly positioned to take advantage of that buzz.

“We are very excited to be manufacturing a product focused on defending our freedoms,” Casey Betzold, president of Snake River Shooting Products, said during the company’s recent debut of Drone Munition. “We see this line as a game changer in the industry and as an important defense against rising threats to our way of life.”

Drone Munition is a 12-gauge shot shell filled with what Snake River calls a “proprietary ferromagnetic ballistic payload,” designed to defend “against drone-based privacy concerns and terror.” The company’s website warns against the action of “irresponsible drone fliers,” while citing statistics that show drones are growing in popularity.

It all sounds pretty dire, but in an email to the Daily Dot, Betzold claims that the new anti-drone hook was more or less just a fun way to market a product. “We have been working with a range training company that utilizes aerial targets for a new type of shooting and training experience (sort of drone based – evolution on skeet shooting),” Betzold wrote. “That relationship coupled with the now daily news stories on drones and increasing awareness, made it a fun new product idea.”

Snake River applies disclaimers wherever its anti-drone ammunition is mentioned, noting that its product is not meant to be used to break the law. But it’s hard not to be confused by the company’s message. “The box clearly notes required knowledge of laws as well as use for hunting and self defense,” Betzold told us. “The real question is, should those warnings have to be in the box or should people be responsible for their use of product?”

Still, the company’s own promotional material seems to sew seeds of paranoia. “With the ability to carry on board cameras, drones have been and are being used for spying on unsuspecting neighbors and others without their permission,” it reads. “With little regulation surrounding drone use, there is much confusion about what a person may do to defend against drone threats.”

Even the original placeholder image on the Drone Munition website has undergone a makeover as the company seemingly struggles to walk the line between capitalizing on a trend and responsible marketing. 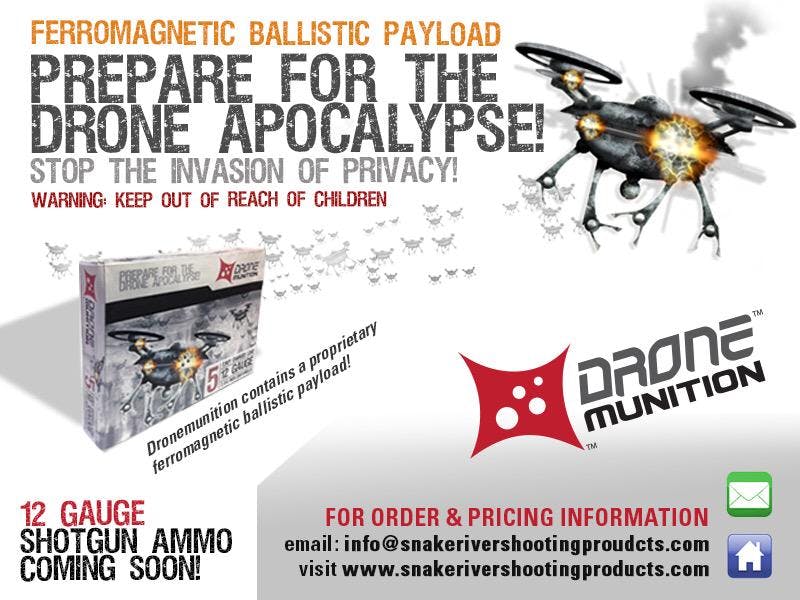 Now, the message is a bit more toned down. It’s still quite bold in its declaration of a drone apocalypse, but it’s a bit less intense. “Stop the invasion of privacy!” has been replaced with the more tempered “Personal defense drones,” and the image now includes a warning against misuse: 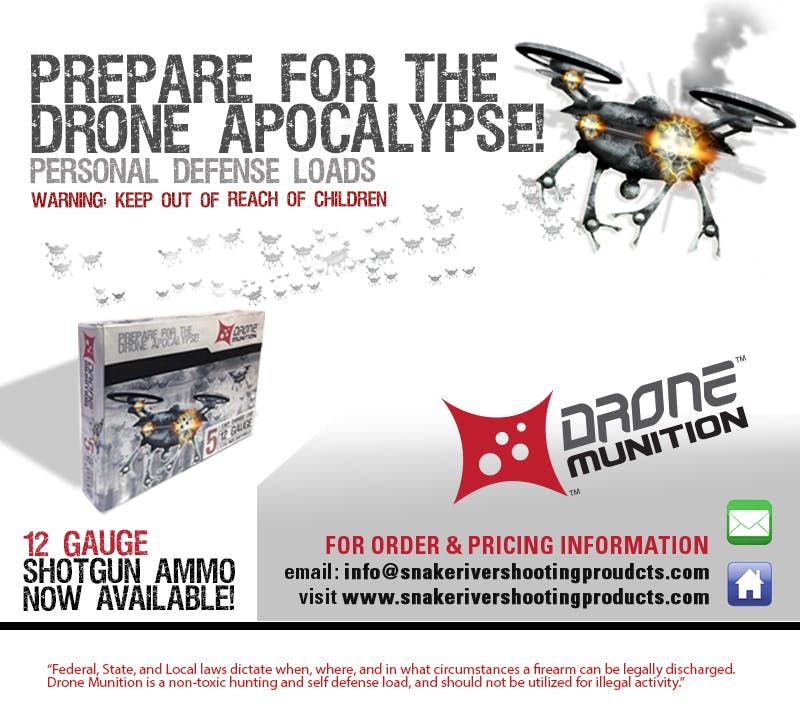 In a post on shooting sports enthusiast site Ammoland, which includes the company’s Drone Munition press release, the majority of commenters voice distaste for the message and the marketing.

“UAV’s are considered aircraft by FAA definition,” one user says. “Shooting at an aircraft is a federal felony, not to mention just plain stupid.” Another alleges “This company is pandering to pinheads, encouraging them to break the law.”

Still, a few seem to be buying into the privacy concerns, regardless of how tongue-in-cheek Snake River suggests it is. “As far as I’m concerned, threatening or not… if one of those ‘toys’, ‘aircraft,’ whatever you care to call it comes hovering over my property I’m taking it as invasion of privacy and shooting it down.”