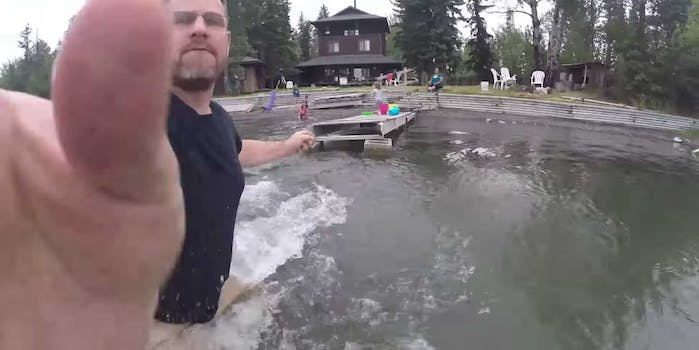 Watch a drone’s nearly fatal plunge into a lake

At least you'd get a nice video memento?

A man in British Columbia almost lost his drone to the unforgiving waters of Green Lake, but because he saved the UAV, priceless footage of the device’s brush with death is available for all to see.

“This was my second flight with the DJI Phantom 2,” writes YouTube user redphive. “I wasn’t paying attention to the battery life and almost gave it a nice bath in the lake.”

He says he had been flying the drone for almost 20 minutes when he failed to noticed that the battery status LEDs were warning him to retrieve the quadcopter or pay the price.

That price, by the way, is $999 on Amazon, discounted from a $1,399 list price. The DJI Phantom 2 sports a 14-megapixel camera that can record 1080p video. Amazon’s product description states that the drone can “fly up to 25 minutes on a single charge,” but perhaps YouTube user redphive hadn’t topped off the battery in a while. Luckily, as you can see, disaster was averted.