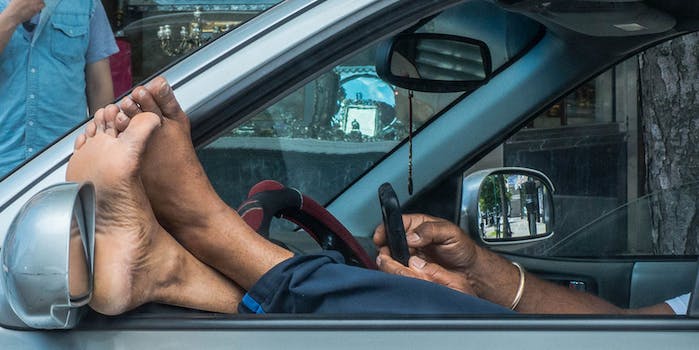 Taking selfies while driving is dumb, but it may not be illegal

Keep your eyes on the road, not your front-facing camera.

The hashtag #Driving has over 3.8 million entries on Instagram, many of them taken by a driver, while #drivingselfie has over 9,000 hashagged photos and videos on the photo-sharing service. This type of selfie is also easy to find on Twitter and Facebook.

Driving selfies certainly aren’t the most outlandish selfie genre, although they may be one of the most dangerous. While many distracted driving campaigns focus on the danger of texting, taking your eyes off the road to choose an Instagram filter that highlights your baby blues is equally reckless.

Last week, the American Automobile Association of Northern New England announced a warning about the growing prevalence of selfies at the wheel, prompting Digital VPR to look into whether driving selfies are illegal. Many states have strict laws in place against texting while driving, but a former Vermont prosecutor Bram Kranichfeld thinks it may be difficult to prove driving selfies break those laws.

“[It] doesn’t sound like we’d be able to bring a charge just based on someone taking a selfie because we’d have to prove that they actually sent it to somebody,” Kranichfeld, who currently serves as executive director of Vermont Department of State’s Attorneys and Sheriffs, told Digital VPR.

In Canada, journalists looked into the fad and affirmed that driving selfies are illegal everywhere except the territory of Nunavut, since it is illegal to operate a mobile device while driving in every other province and territory. In the United States, despite the uptick in laws meant to curb distracted driving, there is more variation when it comes to what you can and can’t do on the road. In Texas, for example, novice drivers are banned from using mobile devices, and texting is prohibited in school zones. But drivers deemed “experienced” don’t have a direct mobile ban.

In many states, however, it is illegal to use a mobile device at all, unless it’s tethered to a hands-free system. At the moment, 12 states, Washington D.C., Puerto Rico, Guam, and the U.S. Virgin Islands have outlawed the use of handheld mobile devices while driving, according to the Governors Highway Safety Association. It may be possible to prosecute a driver under these laws.

Even though driving selfies might not be grounds for legal trouble under texting-while-driving laws, they are a growing concern. Ford’s Driving Skills for Life program, which was established in 2003 to teach newly licensed drivers about safe driving techniques, recently released a video on Facebook highlighting the problems with this type of selfie.