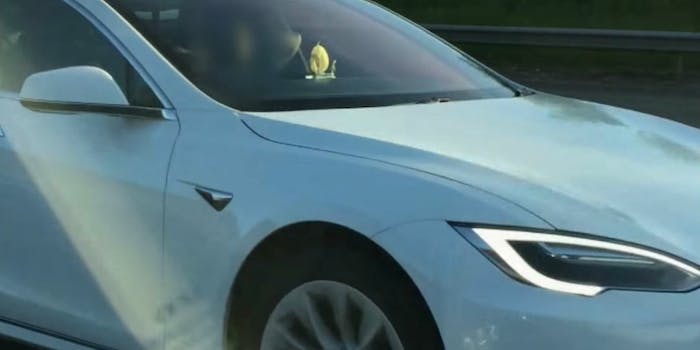 His license has been suspended for 18 months.

Tesla’s “Autopilot” mode isn’t as autonomous as its name suggests.

A man in England found this out the hard way when he enabled the driver-assistance tool and moved to the passenger seat of his vehicle. Fortunately, the system protected the man and those around him, but it couldn’t save him from the law. According to People, Bhavesh Patel, 39, pleaded guilty to dangerous driving charges and was given an 18-month suspended license on April 20 after he was caught on video attempting the dangerous stunt.

For sitting in the passenger seat while his $70,000 Tesla S 60 flew down the highway without a driver, Patel is also required to complete 100 hours of community service over a 10-day period and pay £1,800 in prosecution costs. Police estimate his vehicle was traveling 40 miles per hour on a congested M1 highway.

Footage of the dangerous conduct, which reportedly happened in May 2017, was uploaded onto social media and presented to the police, who sent a Notice of Intended Prosecution to Patel. The driver (or passenger) said he knew the stunt was “silly,” but claimed the car was capable of something “amazing” and he was just the “unlucky one who got caught.”

“What Patel did was grossly irresponsible and could have easily ended in tragedy. He not only endangered his own life but the lives of other innocent people using the motorway on that day. This case should serve as an example to all drivers who have access to autopilot controls and have thought about attempting something similar.

I want to stress that they are in no way a substitute for a competent motorist in the driving seat who can react appropriately to the road ahead. I hope Patel uses his disqualification period to reflect on why he chose to make such a reckless decision on that day.”

Patel isn’t the first person to overestimate the capabilities of Tesla’s Autopilot mode. The first death in a semi-autonomous vehicle occurred in a Tesla when former Navy SEAL Joshua Brown, 40, kept his hands off the wheel of his Model S for extended periods of time. The Autopilot feature reportedly failed to recognize the white side of a truck against a bright sky and drove under the trailer. A Tesla owner unwisely tried to recreate the accident and nearly crash their vehicle. To its credit, the Autopilot feature will send warnings to drivers when it can’t detect their hands on the wheel.

When enabled, Autopilot helps the car automatically stay in lanes, switch lanes, self-park, and apply brakes. However, Tesla Autopilot—and riveling systems like GM Super Cruise or Mercedes Pilot Assitant—are a long way from being fully autonomous. The German government even pressured Tesla in 2016 to rename its misleading Autopilot feature in fear that drivers would stop paying attention to the road.

CEO Elon Musk, though notorious for his overly ambitious timelines, expects level 5 autonomy in a Tesla by 2019. Until then, we strongly recommend you stay behind the wheel.