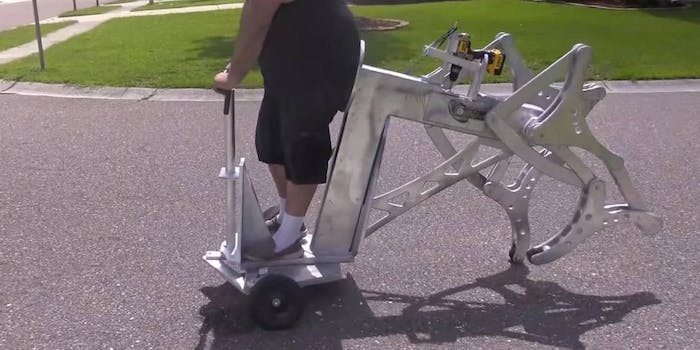 Yes, yes, robot apocalypse jokes. But this thing is scary enough as a hobbyist project.

Drills aren’t just used for putting holes in things. You can use them to power bikes, water pumps, dart guns, and now, thanks to one hobbyist, a nightmarish contraption that belongs in a horror movie.

YouTuber Izzy Swan has a channel filled with tons of DIY devices, many of them powered by nothing but a drill. But his latest invention skews less toward practical and more toward “Why?”

Swan built a terrifying walking machine that looks like a rejected prop from the film Wild, Wild West.

The steampunk-style homemade monstrosity, inspired by Dutch artist Theo Jansen‘s Strandbeest, has an unsettling walking style that will make your skin crawl. It can carry up to 370 pounds while being propelled forward by nothing more than a 20-volt drill.

Luckily, the battery only lasts one mile, so you should be able to outrun this thing—though it will always catch you in your night terrors.

Don’t let the shiny silver finish on the legs fool you—Swan’s machine is made purely out of wood. He crafted the framework and legs over the course of about a month until the legs gave him the stride he wanted. It’s a shame that he put so much work into the device, because now that we know it’s made from wood, all we want to do is destroy it with fire to stop the haunting.

Swan has a huge collection of other projects on his YouTube page and website, most of which will not induce goosebumps or make you imagine the darkest dark and nothing but the horrendous sight of that walking machine’s legs closing in, with the knowledge that there is death and only death waiting for you.