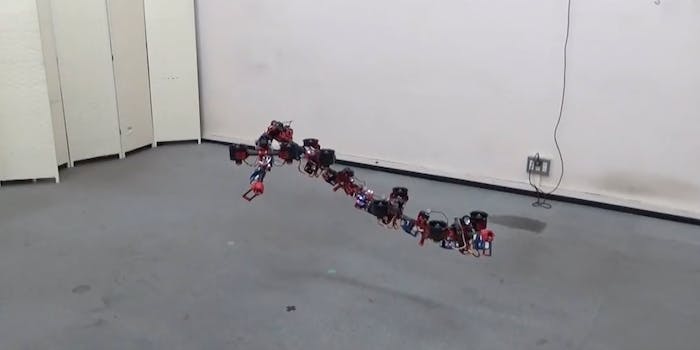 This flying ‘dragon’ drone isn’t terrifying at all

This dragon drone could be the future of aerial manipulation.

The University of Tokyo has developed a “dragon drone,” but it’s not in the shape of a fire-breathing lizard—or a menace to local towns or villages.

The JSK Lab’s dragon drone gets its name from its function: it’s a Dual-rotor embedded multilink Robot with the Ability of multi-deGree-of-freedom aerial transformatiON. The drone is modeled after the idea of a traditional dragon kite, with a tail composed of tiny smaller kites linked together. (It also seems to channel some dragon qualities from the dragon dances you might find in Chinese New Year parades.)

Composed of several smaller drones, the dragon drone can change shape mid-air on demand, or autonomously, shifting its shape to navigate through difficult spaces as needed. Its brain is an Intel Euclid development kit, and it has a battery pack positioned along its spine so it can fly for up to three minutes at a time.

JSK lab member Fan Shi says the project is “a breakthrough in hardware design which, in a beautiful way, connects a manipulation arm with a ducted fan-driven aerial robot.”

The version above is composed of four modules linked together.

The team behind this drone believes that a larger version—12 drones linked together, for example—could be used to operate like a flying arm. This arm could be used to manipulate objects, pick up things like a pincer, or otherwise interact with the environment, potentially in places where it might be dangerous for a human arm to do so. The Verge notes it could be useful in flying through and conducting maintenance in ductwork, for example, but perhaps it could also one day be used to fix damage on the side of a building, or grab a kitten that’s gotten itself stuck atop a pole.

This dragon drone is pretty impressive as is, but a whole humanoid in the air? That might cross the line from impressive to terrifying.